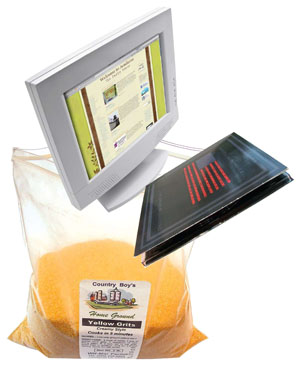 MEAUX BETTA NEWS
Need your Lafayette and Acadiana fix of everything from the bizarre to business to news on ex-pats? Check out The Daily Meaux. Beating everyone to the punch, the blog broke the news that “Louisiana Man” Doug Kershaw is running for a school board seat in Greely, Colo. Who knew? Mark Meaux, that’s who. The Bluerunners front man found himself with some extra time on his hands after the popular nouveau-Cajun-roots-rock ensemble broke apart like a pig at a boucherie several months ago. Now he occupies his spare time compiling The Daily Meaux, which highlights and links to news, features and videos of all things Acadiana (with a little LSU thrown in for good measure) from media sources near and far. “I thought making it an aggregate site of things that interested me might be fun, and hoped that it might catch the interest of other folks, too,” the guitarist/singer/songwriter/blogger says. “So, now everyday for about three to five hours a day, I skim through various search engines looking for stories about Acadiana or Louisiana. The rest of the day I day dream about suiting up as a kicker for the Saints.” Feelin’ ya, bro. Feelin’ ya. Log on to welcometoacadiana.blogspot.com for your Daily Meaux. — Walter Pierce

SHAPE SHIFTING
You thought you had Michael Juan Nunez pegged as just another Louisiana blues revivalist dude, right? WRONG. Think again. On his new CD, American Electric, Nunez, like some mad scientist locked up in the lab of his Mind, audaciously deconstructs his own love of blues, roots, rock, and folk and comes out with a Frankenstein-like monster that roars, grinds, stomps, jitters, tweaks, and spits at the hallowed totems of the age. Like some kid just reveling in the joy of making music, Michael Juan, at mid-career strangely enough, has thrown out the rule book. Like Tom Waits in the 80s, he’s burning with a new fire and charging into the great unknown, reaching for something stranger and superior to his past efforts. Feeling no allegiance to the purist orthodoxy that dries the lifeblood of new creation, Nunez playfully whips his way through twelve tunes that screech, grind at odd intervals, and scream through forests of invention. This is John Lee Hooker mind-melding with Ray Kurzweil type stuff. Go buy one at www.digstation.com , Barnes and Nobles in Lafayette, or the Louisiana Music Factory in New Orleans. — Dege Legg

OLD YELLER
Everybody loves grits round here. But even though they turn up in most grocery stores, it’s hard to find the yellow kind. I’ve been buying organic stone ground yellow grits at Drug Emporium for a few years, but I’m delighted to say, I just found a Louisiana company offering not only local grits, but a different, fine grind, of the corny cereal. Country Boy’s Home Ground Yellow Grits, from Wil-Mar Farms in Kentwood, La. is great grits in my book. While the label says they are coarsely ground yellow corn, I find the grind to be delicate, which translates into quick cooking, five minutes at most. The result is a creamy pot of golden grits, good for breakfast, beautiful as a bed for grillades or shrimp, and a perfect stand-in for dishes that call for polenta. You can find a two-pound bag for less than $3 in a box located next to the cash register at Champagne’s in the Oil Center. — Mary Tutwiler