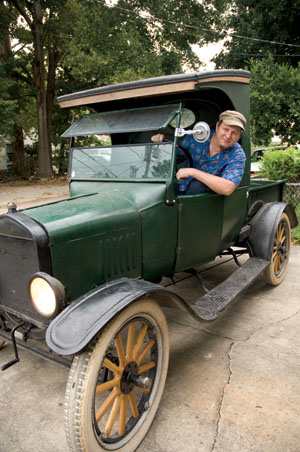 The Ford Model T was the automobile that started it all. Mass produced, easily maintained and affordable, it was the spark plug that ignited America’s car culture. Chugging down Congress Street near the library one recent afternoon, rattling like a kerosene generator, you’d never know it. Behind the wheel, Dex Doucet of Lafayette ignores the stares and glances of appreciation as the ’23 Tin Lizzie, tiny in comparison to the SUVs sulking nearby, moves merrily along at about 25 mph. Doucet is one of a handful of antique car enthusiasts in the Acadiana area. You can also find them on the Internet, digital aggregations of like-minded people who traffic in anecdotes, tips, pistons and clutches — tinkerers who manage to keep alive very old cars and the era they represent. Antique in this case is also a pun — many in this demographic belong to the AARP set, people with the time and disposable income to devote to maintaining the venerable vehicles.

“You spend as much time wrenching on them as you do riding,” admits Doucet, who also enjoys scraping Klezmer tunes off an old fiddle when he’s not replacing gaskets. In truth, it’s inaccurate to call Doucet’s Ford a Model T. Strictly speaking it’s a mish-mash of early Fords. Although it has the character of the T, Dr. Frankenstein’s hand is evident.

The 35-year-old machinist says he got his love of old automobiles, and much of the knowledge on how to maintain them, from his father, Kermit Doucet, a Lafayette lawyer who passed away 11 years ago and passed down to Doucet a 1922 Chevrolet touring car. It’s a gem of ride and the car Doucet is most proud of, in part because there are far fewer antique Chevys on the roads; there were far fewer produced, so getting parts can be tricky.

Another factor in an old car’s durability relates, believe it or not, to wood. Early manufacturers more or less wed the horse-drawn buggy to the internal combustion engine — a wood frame covered in sheet metal. “Henry Ford got away from using wood in the manufacturing of the cars before everybody else and instead he used steel,” Doucet explains, “so they hold up better.”

Doucet’s Ford remains a work in progress, but he’s turned nary a ratchet on the Chevy in seven years. He puts no more than a few hundred miles a year on them — they are very old cars after all. And you’re not likely to spot them in a drag race; the Chevy’s top speed, according to Doucet: “About 40, with no head wind.”

To see a nice collection of antique automobiles from around Acadiana, head over to Dwyer’s Café in downtown Lafayette between 7:30 and 9 a.m. on Saturdays when a loosely knit club of enthusiasts gathers for breakfast, tire kicking and tale swapping.