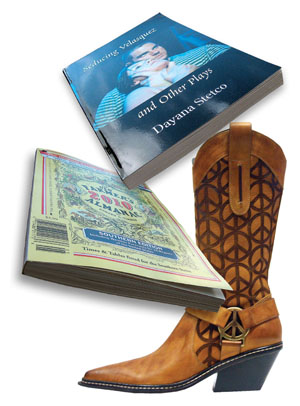 SIMPLY ABSURD
For an introduction to theatre of the absurd, see Wikipedia. For six fascinating examples of the genre, see Seducing Velasquez and Other Play****s (Ahadada Books) by playwright/critic/professor Dayana Stetco. A native of Romania and current associate professor of creative writing at UL Lafayette, Stetco weaves 400 years of culture and its creative manifestations into a roiling pastiche. The title play takes its name from 17th century Spanish painter Diego Velasquez, who finds himself trapped in one of his works. It is one in a cavalcade of allusions to art history and literature that marches cacophonously through Stetco’s dramaturgy. From the empowered female victim in the opening salvo, “Milena, Stripping,” to the final piece, “Urmuz,” — a “brief gallop” as Stetco describes it in her director’s notes through the work of pre-Soviet Romanian avante-garde writer Dem. Demetrescu-Bazau — Stetco explores the intersection between meaning and meaninglessness, between comedy and tragedy, tension and stasis. Both referencing and refuting the Bard, the namesake character in “Milena, Stripping,” observes: “... the world is NOT a stage and nothing goes according to plan.” For order information on Seducing Velasquez and Other Plays, log on to http://www.ahadadabooks.com /. — Walter Pierce

USEFUL, WITH A PLEASANT DEGREE OF HUMOR
That’s the slogan of the The Old Farmer’s Almanac (available for $5.99 wherever books and magazines are sold), and here’s hoping the 2010 version is accurate. Its weather prediction for summer in the Southeastern United States: cool and dry. Yeah, right. Mixing wit and wisdom, the almanac, now in its 217th year, has managed to maintain its quirky character. From the traditional forecasts, recipes, how-to tips and planting prognostications to featurettes on feckless figures and curiosities, The Old Farmer’s Almanac is a charming reminder of the 20th century. And the 19th. And the 18th. Most pleasant of all, perhaps, are the almanac’s famed classified ads. Looking for a miracle healer or a chicken roaster? Or how about this nugget of wisdom sure to keep anyone out of trouble: “Read Romans, Chapter 10, verses 9-10. Next, read entire Bible repeatedly. Pray, attend church.” — WP

PEACE FOR THE CHILDREN
Lafayette’s Shoefits is continuing to team up with shoe designer Donald J Pliner and his Peace For The Children Foundation, which provides grants for projects that promote peace in the lives of children. Anytime one of Pliner’s items that has a peace symbol on it is sold, the company donates a percentage to the Peace for the Children Foundation. This season Shoefits is selling the spectacular leather Jora boot, which is embellished with peace signs and retails for $595 (a western-style boot that will never be out of vogue). As part of this effort, Pliner and his wife, Lisa, also help in the development of playgrounds, believing they are not only an integral part of childhood, but are also the training grounds for children to learn critical negotiation skills and achieve the peaceful resolution of differences, encouraging them to grow into tomorrow’s peacemakers. In fact, experts say play time at a park is good for kids, as it helps battle the rising childhood obesity rate, contributes to mental wellness and offers beneficial social interaction for children living in urban areas that lack safe outdoor places to play. Shoefits is located in the Shops at Martial on Kaliste Saloom Road, 216-0200. — Leslie Turk