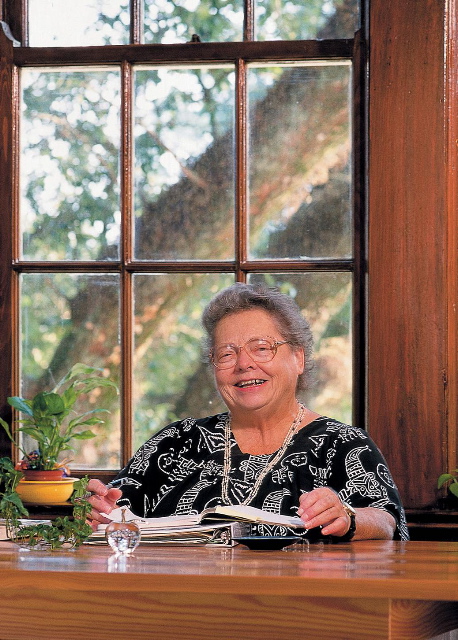 Funeral services will be held at 10:00 am on Saturday, September 19, in the Delhomme Chapel of the Flowers for Dr. Patricia Kennedy Rickels, 82, UL Lafayette Professor Emeritus of English, former Director of the Honors Program, and human rights activist, who passed away at her home in Lafayette, Louisiana, on September 15.

Beloved teacher, mentor, colleague, and friend to many generations, Dr. Rickels retired from UL Lafayette at the end of the Spring 2007 semester, after fifty years of service to the university as a faculty member and administrator. She had a distinguished record of service, teaching, scholarship, and administration. An innovative and imaginative teacher, she was truly outstanding on all levels of instruction. She was also a highly regarded scholar in the fields of folklore and African American literature. Known affectionately as Dr. Pat, her generosity to students, personally, academically, and at times financially, is legendary.

A native of Kemmerer, Wyoming, she was born on February 12, 1927. She grew up in Montana, Alaska, and the Panama Canal Zone. She received a B.A. from University of Washington in Seattle in 1948, an M.A. from Louisiana State University in 1951, and a Ph.D. in English from LSU in 1961. She also did post-doctoral work at Southern University in 1967-68 in Black history and literature. In 1957, she came to UL Lafayette, formerly SLI, as an Instructor in English, and in 1958 she married her colleague, Dr. Milton Rickels. They were inseparable soulmates and collaborators until his death in 1998. A great sorrow in their lives was the loss of their son and only child, Gordon Rickels, who was killed in an automobile accident in Oregon in 1983.

Beginning in the 1960s, she was deeply involved in civil rights, and she continued her involvement in the struggle for racial justice throughout her life. She was a founder of the Louisiana Human Relations Council in 1965, and she served as its Secretary from 1983 until her final illness. She received the Human Relations Council Award as Humanitarian of the Year in 1975.

Dr. Rickels was one of the project directors for a 1979 oral history collection of taped interviews with civil rights leaders, resulting in “No Gains Without Pains: An Oral History of the Civil Rights Movement in Louisiana,” part of the Carlton O. James Oral History Collection in Dupré Library.

As a scholar, Dr. Rickels established a national reputation in the fields of American folklore and African American literature. She was the co-author with Dr. Milton of two books, Richard Wright (1970) and Seba Smith (1977). She was also the editor of 1776-1976: 200 Years of Life and Change in Louisiana (1977). Her published articles and essays include “’The Sound of My People Talking’: Folk Humor in A Gathering of Old Men” (1993, co-authored with Dr. Milton), “Martin Luther King as Folk Hero,” “The Folklore of Acadiana,” and “Memories of Lead Belly” (1968). Her article “Some Accounts of Witch Riding,” first published in Louisiana Folklore Miscellany in 1961 and later republished in two anthologies, is often cited as a seminal article in folk belief.

As a teacher, Dr. Rickels inspired generations of students, sometimes shocking and entertaining them as well with her wit. She loved the works of Emerson and Thoreau and followed their teachings as few others have, passing their wisdom on to her students. She taught multicultural texts long before the term multiculturalism was used.

In 1970, Dr. Rickels was one of the three co-creators of the University Honors Program, and she served as Director of the program from 1979 to her retirement in 2007. In 2003, the home of the Honors Program, Judice Hall, was renamed Judice-Rickels Hall, in honor of Dr. Milton Rickels. It now honors Dr. Pat as well. The College Board Review profiled Dr. Pat and her work with the Honors Program in its Fall 2001 issue with an article by Kathleen Thames entitled “Down on the Bayou: Dr. Pat Honors Us All in Lafayette.” The article noted: “She has also been a matchmaker, a banker, a shoulder to cry on for students during three decades of change.”

Elaine Bernard, her administrative assistant in the Honors Program for over 23 years, praised Dr. Rickels relationship with students: “She was a philanthropist and not just to Honors students. She was known to pay tuition, rent, doctor bills, etc. She was the most generous person.”

UL Lafayette Provost Steve Landry said, “She was an administrator and leader on campus whose dedication to her program was entirely grounded in the individual students in her program. She had the capacity to shepherd and mentor students who sought direction and helped them discover their intellectual and personal passions.”

Other important honors Dr Rickels received during her career include the Amoco Foundation Award for Distinguished Undergraduate Teaching in 1980. She was a member of Phi Beta Kappa, University of Washington, and a Danforth Fellow. She also served on the Academic Development Board of Holy Rosary Institute.

The 1990 Humanist of the Year Award was presented jointly to Drs. Pat and Milton Rickels by the Louisiana Endowment for the Humanities. In presenting the award, the LEH stated that the Rickels “are known throughout Louisiana as an inseparable pair in their contributions to the humanities. They impart to their students significant lessons in tolerance and respect for the ideas of others, the importance of self-worth, and the value of human dignity. The Rickels inspire all whose lives they touch to cherish humanity of whatever color, creed, or class. They help people appreciate what it means to be a human being.”

One of the last projects Dr. Pat participated in was a documentary on her former colleague and dear friend John Kennedy Toole, author of the Pulitzer Prize-winning novel A Confederacy of Dunces. Film producer Joseph Sanford said: “It would not be a film without her. Without her participation we could not have made this film. She brought a really powerful personal love and intellectual insight into the story of Ken Toole. She is articulate, funny, beautiful—so Pat.” John Kennedy Toole: The Omega Point will be dedicated to her with a special dedication at the end of the film to the memory of Dr. Pat Rickels.

She is survived by a brother, Ed Kennedy, nephews, Wes and Robert Kennedy, niece, Joyce Kennedy, and aunt, Francis Etzwiler. She is also survived by all the UL Lafayette Honors Programs students whose lives she touched and will continue to affect and by all the people who loved her and were with her to the end.

Dr. Rickels was preceded in death by her parents, Charlotte and Wes Kennedy, her husband, Dr. Milton Rickels, her son, Gordon Rickels, and a brother, Al Kennedy.

Dr. Pat was cared for in her final illness by Heart of Hospice. Contributions to Heart of Hospice are encouraged. The address is 201 W. Vermilion St., Lafayette, LA 70501.

Personal condolences may be sent to the Rickels family at www.delhommefuneralhome.com.

Raconteur, folklore professor, founder and director of the UL honors program and teacher for 50 years, civil rights activist, and friend of everyone who came to her, Pat Rickels died last night at the age of 82.

“Dr. Pat was such a wonderful woman, and she gave it all,” says UL honors program director Dr. Julia Frederick, who took over after Rickels retired in 2007. “She was the heart of the honors program for 30 years. She created the rock on which it stood, she believed in her students and gave that fervor to her students.”

Rickels was one of eight educators nationwide profiled by The College Board Review in 2001 in a story titled, "Heroes of a Different Kind." The article quoted former student student Pam Bourque, who summed up Rickels' value as a teacher and a mentor: "Dr. Rickels makes everyone feel like their opinion is worth hearing, that no matter what it is, everyone has a voice . . . She opens her arms to a student of whatever age or whatever background or whatever ethnicity. Everyone has a place in the honors program at UL Lafayette. It’s really her family."