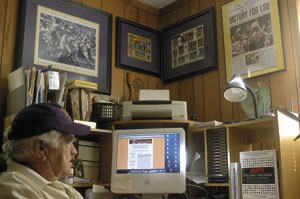 LSU's No. 1 fan, Don Long, isn't one to rest on his laurels. The 73 year-old Lafayette resident, known as "Dandy Don," has long endeared himself to fellow Tiger fans with his comprehensive Web site, dandydon.com, that feeds the insatiable appetite for LSU sports info. On Wednesday, Dandy Don launched a new and improved site with even more data. The site now has added game schedules and rosters for all five major sports as well as a football depth chart alongside to complement the daily blog and other popular features like its list of Louisiana's top high school football prospects. Readers will immediately notice the site's cleaner look and new menu-based navigation that allows you to more easily peruse the 40 + pages.