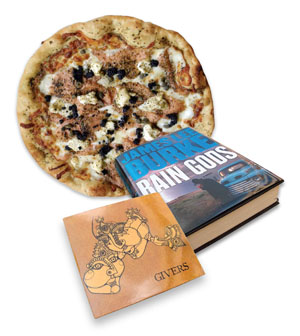 GOTTA GIVE TO RECEIVE
So the saying goes that you gotta strike while the iron is hot. Well, local band Givers is hot right now. And local label Valcour Records has jumped on it to do the said striking with an introductory self-titled, five-song EP of sprite, uplifting life-affirming Givers tunes. Furtively imbued with a Spring-like lyrical naivete contrasted with some accomplished instrumental chops, the disc kicks out a propulsive and crowd-pleasing mix of Afro-centric world beat and Williamsburg-informed indie pop. It’s an enjoyable concoction that plays like Graceland-era Paul Simon cut with the newest Vampire Weekend. To buy one, go to Valcourrecords.com . — Dege Legg

IT’S RAINING
I don’t know how many ways there are to love James Lee Burke. Take this one: In his new book, Rain Gods, Burke has created a sexy septuagenarian sheriff, Hackberry Holland, who, along with duking it out with the bad guys, has to gently fend off his attractive 40-something deputy. How ’bout the running commentary (Rain Gods is set in the Texas borderlands) on the plight of illegal immigrants who are at the mercy of smugglers, “coyotes” who will abandon them to die at the glimpse of an immigration officer. Or the inner struggle of a man who thinks he has been anointed by the gods to wipe corruption off the face of the earth with a WW II vintage Tommy gun. Burke’s plot lines are often so convoluted it’s hard to follow the skeining stories and remember who wronged whom, and how. But the moral compass of protagonist Holland keeps us on course, and of course, with Burke, it’s always a lively read. On sale at virtual and real bookstores everywhere. — Mary Tutwiler

IT’S AMORE
I’ve been waiting 10 years for this pizza. No, the delivery man didn’t get lost. It was the oven, the spectacular wood-fired pizza oven at Louisiana Pizza Kitchen that went cold when restaurateur Jack Ainsworth left the pizza business to open Bella Figura a decade ago. While he has had pizza on his menu, both in the old location on Kaliste Saloom, and in his River Ranch restaurant, it wasn’t until he made the move to The Shops at Martial, in the third incarnation of Bella Figura, that he built another Italian brick wood-burning oven and re-created the best pizza in town. At 800 degrees, the minute the pizza hits the hot floor of the oven, the crust crisps up — and everyone who loves artisan pizza knows the crust is everything. Pizza master Terry Harrison has been with Ainsworth since those Louisiana Pizza Kitchen glory days, and he’s one happy pie man, spinning out beauties topped with smoked salmon, caviar, capers and cream cheese, in addition to more predictable tomato, meatball, andouille, mozzarella, roasted garlic and black olive toppings. A dainty pizza for two will run you anywhere from $8-$14. Call 216-6660 to order, and there’s a drive thru if you don’t want the full blown restaurant experience. — MT