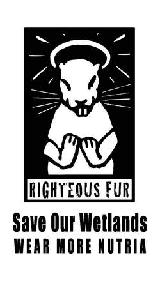 Maybe second time’s the charm. Louisiana Wildlife and Fisheries launched a campaign in the 1990s to make nutria rat fashionable, both on the table and as haute couture. Neither nutria fur coats nor nutria sauce piquant made it past the grimace stage. While the state is gaining on nutria eradication through its bounty program, offering trappers $5 a tail, more than 89 percent of the carcasses are left to rot in the marsh.

Cree McCree, a New Orleans artist and writer, believes waste not want not. In conjunction with New York City’s Fashion Week, she’s premiering a line of nutria apparel, dubbed Righteous Fur, at La Fête d’Ecologie, a festival put on by the Barataria-Terrebonne National Estuary Program this Saturday in Thibodaux. “Recycling their pelts into useful and fashionable apparel encourages bounty hunters to increase their nutria yield, decreasing damage to the wetlands,” McCree told the Houma Courier. “Also, a portion of all profits goes to the Barataria-Terrebonne Estuary Foundation, which works to restore our vanishing coast.”

Nutria is not only women’s wear. McCree and designer Oliver Manhattan have created a man’s vest, bell-bottom pants trimmed in fur, a shrug, a swing coat, bags and hats for men and women, as well as nutria teeth jewelry.