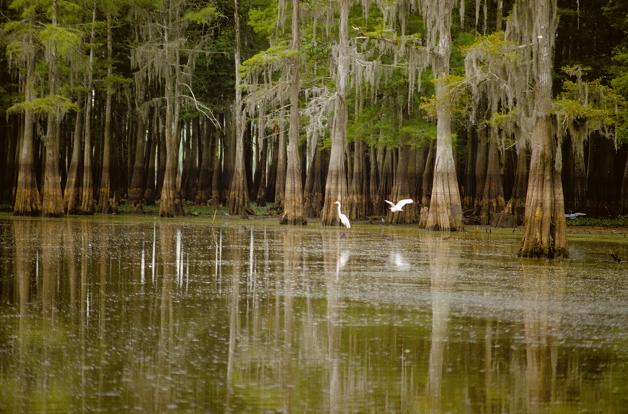 There’s canoes you can use, bodacious barbecue and a kicking concert, all Saturday, Sept. 26, at the inaugural Inherit the Atchafalaya Basin clean-up. Musician and community activist Drew Landry is focused on the myriad groups trying to address the complex problems in the country’s largest wetland.

There’s a lot to understand when it comes to the Atchafalaya Basin. Home to every kind of creature from alligators to eagles, the basin has been so severely exploited for the last century that those who know it well say one of America’s great wildlands is slowly dying.

The great stands of cathedral cypress trees were logged in the first half of the 20th century. With the discovery of oil, exploration companies criss-crossed the basin with canals, throwing up east-west levees that stopped the natural north-south flow of water. As a consequence, backwater lakes and seasonal swamps have stagnated, creating what basin denizens call “dead water.” The huge east and west levees, built after the Flood of 1927, keep spring high water and the silt it carries inside the artificial boundaries of the basin, causing steady siltation that is creating dry land in the wetlands. Lately, crawfishermen, who have traditionally made their living catching deepwater crawfish in late spring, have had altercations with hunting club members over property rights and public use.

Groups like the Louisiana Crawfish Producers Association, the Sierra Club and Atchafalaya Basinkeeper have historically worked on different issues in the past. Landry says he wants to build a single coalition. “There’s power in numbers,” he quips.

This Saturday, registration for the clean-up begins at 9 a.m. at the Butte La Rose exit of I-10. Pack and Paddle canoes are on loan for those without boats. Clean-up commences at 10 a.m. through 2 p.m. in Henderson Lake. The boat with the biggest haul of trash will receive the Golden Shrimp Boot award, delivered by a team of sky divers. Following the clean-up, barbecue and boogie with the Drew Landry Band, Horace Trahan, Snarky Puppy and the Howdies at Whiskey River, starting at 4 p.m. Concert tickets cost $15, buy a T-shirt for $20 and get into the concert free. Proceeds go to the Atchafalaya Basinkeeper organization. You can register your boat and purchase tickets on line as well, here. Or call Drew Landry, 326-9722 for more info.