Filming in Lafayette of the Disney movie about Secretariat and his owner is nearing the first furlong. 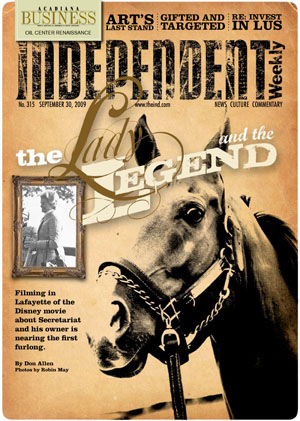 In the fall of 1969, Ogden Phipps of Wheatley Stable and Meadow Stable’s Penny Chenery held a coin toss to see which breeder would get first choice of offspring from Bold Ruler, one of the important stallions of his time. Chenery had bred two mares to Bold Ruler, owned by Phipps, and the rules of the coin flip meant the winner would have first choice. Phipps won and chose a weanling filly while Chenery was left with a colt and an as-yet unborn foal.

Nine months later, Chenery’s stable finally had its consolation prize: a bright red chestnut colt with three white socks and a star with a narrow blaze. They named him Secretariat.

There is no shortage of irony where Chenery and Secretariat are concerned. Not only did Meadow Stable have to “settle” for what was left after the coin toss, but it took a full year for the Jockey Club to even give its yearling a name since the first 10 submissions were denied. Now, four decades later, Walt Disney Pictures will finally bring to the big screen the story of the indomitable Penny Chenery, the 87-year-old matriarch of Meadow Stable, and the horse known as “Big Red.”

“I’ve worked with Ms. Chenery for about a decade, and she’s had at least four different [movie] proposals during that time and turned them down,” says Leonard Lusky, merchandising and marketing director for Secretariat.com. “But Disney came to us about two years ago, and Penny liked what they had to say and how they presented themselves. She was impressed with the funding and plans for distribution and perhaps more importantly, she received assurances from the company that the real story of what actually transpired during that time would be told.”

Produced by Mayhem Pictures for Disney, Secretariat has already begun shooting in Kentucky and will begin shortly at locations in Lafayette.

“Ultimately, all major decisions will be made by the studio,” admits Lusky. “But Disney asked Penny what was truly necessary and untouchable and she went down the list. To Disney’s credit, they’ve been very accommodating and their dedication to authenticity has been incredible.”

If so, racing aficionados can breathe a sigh of relief. The last horse racing movie to come out of Hollywood, Seabiscuit, was often as entertaining as it was inaccurate. “There were parts of the movie she really enjoyed and parts she didn’t, ah, enjoy so much,” admits Lusky. Among the film’s myths: War Admiral was a “monster” of 18 hands in height, when actually he was just 15 hands and smaller than the average horse, and that boxing match where the jockey loses sight in his eye never happened. On the other hand, Seabiscuit earned seven Academy Award nominations for 2001, including one for Best Picture. If Disney can garner anything near that sort of attention with Secretariat, Lafayette’s economy could get a bigger boost from Walt Disney Pictures in the years to come.

“There were inquiries made a couple of months back, but we really had no idea what the production was about [at the time],” says Marcus Brown, director of Lafayette Entertainment Initiative, which acts as a consultant for the city. “We simply had to match their time frame. We heard back from them about a month ago, and they were inquiring about locations and availabilities for office space along with soundstage and shooting locations. What we’re doing now is serving as a liaison between production and the city.” 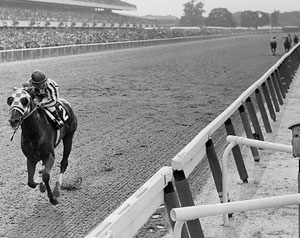 Secretariat won the 1973 Belmont Stakes by an astonishing 31 lengths.

“I told the council that as I understand it, the production budget for Secretariat is somewhere between $25 million and $40 million and that as much as 85 percent of that will be spent in Lafayette,” says City-Parish President Joey Durel.

In fact, Louisiana has become quite the player in the movie industry. Because of the state’s financial incentives to film here, it now ranks fifth behind California, New York, New Mexico and Hawaii in top film locations. According to the Louisiana Economic Development Department, there have been more than 200 movies shot in the state since 2002, including an estimated 80 last year with 30 more scheduled for 2009. A study by Economics Research Associates released in February estimates productions in Louisiana totaled more than $429 million in 2007, and the total economic benefit to the state was $763 million.

The study also details the various types of impacts, all of which should pay dividends locally. They include employment, the need for materials and supplies, hotel rooms, and restaurant and retail revenues. Actually the economic windfall has already begun, though few potential beneficiaries are willing to go on record.

According to one source, at least two local contractors have signed on to do work for the production company but claim confidentiality agreements forbid any comment. Bam Casting of New Orleans, which handled this past weekend’s huge casting call for movie extras at the Cajundome, also refused to comment; meanwhile, Rachel Aberly of Los Angeles, who will handle publicity on location, says that nothing’s really written down yet.

It’s the elephant-in-a-room syndrome; if you don’t talk about it, maybe it’s not really there. But if the production is hiding, it’s doing so in plain sight. The shopping center at Kaliste Saloom and Ambassador Caffery that used to house Winn Dixie now includes large trucks labeled  “Hollywood Trucks Buena Vista Studio” and three large office trailers next to the building.

Durel theorizes that many of the locals simply don’t want to jeopardize their agreements with Disney. “About the only time [the production company] would ever come to us is if they had to shut down a street,” he says. “I’ve heard that some people, when they saw workers measuring distances on their street, got excited that the city was about to widen something. Turned out it was Disney workers measuring to make sure the streets were wide enough to drive their trucks on.

“Of course, you hear a lot of things,” continues Durel. “Like turning downtown Lafayette into something that looks like a part of New York and building sets that will transform the old Evangeline Downs into look-a-likes of five different race tracks. I know the [producers] were excited about Lafayette because it’s an area you can get a lot of different looks from.”

And it’s cheap, at least compared to other locales. The Curious Case of Benjamin Button, one of last year’s Oscar contenders, was originally scheduled to be filmed in Baltimore until the producers realized they’d save a ton of money by moving the show to New Orleans. According to the ERA study, Louisiana was one of the first states to offer tax breaks for film production beginning in 2002. Since then, 40 other states have developed incentive programs. Currently Louisiana offers film companies a 25-percent production tax credit, 40-percent infrastructure tax credit and 10-percent wage/withholding credit. The numbers eventually add up to the point that Louisiana becomes a very attractive location to produce a movie. 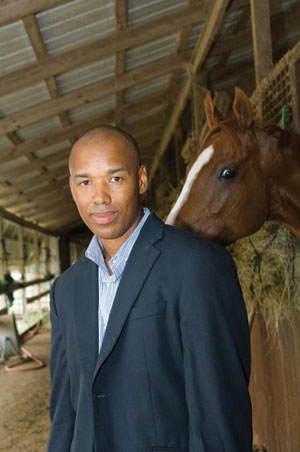 Marcus Brown, director of the Lafayette Entertainment Initiative, has acted as a liaison between Disney and the city.

The indirect impact of shooting a feature film in a particular location can pay huge dividends in tourism, according to the ERA report. When Close Encounters of the Third Kind was released in 1977, tourism at Devil’s Tower in Wyoming rose 75 percent, and the HBO series Deadwood has increased tourism in the Black Hills of South Dakota by 800,000 per year. Bridges of Madison County (1995) tours still draw 50,000 annually 14 years after the movie’s release.

This alone holds great promise for Secretariat and Acadiana. Long considered by Blood Horse Magazine and its august panel of experts as one of the two greatest racehorses ever, the colt and his owner already have a built-in fandom. Penny Chenery took over Meadow Stable for her ailing father at a time when she was a 40-year-old housewife who knew little about the racing industry. Yet Chenery learned enough to serve as president of the Thoroughbred Owners and Breeders Association from 1976-84 and was elected to membership in the Jockey Club in 1983. Three years ago, she was honored as a recipient of the Eclipse Award of Merit.

Diane Lane, a veteran of 50 feature films (Unfaithful, The Perfect Storm, Untraceable), will portray Chenery in the movie while John Malkovich (Burn After Reading, Changeling) has been cast as Secretariat’s trainer, Lucien Lauren. Hollywood Reporter says that Scott Glenn (The Silence of the Lambs, Training Day) is aboard, and Dylan Walsh (from the FX series Nip/Tuck) will play Penny’s husband. Randall Wallace, who wrote Braveheart, is the director.

Apparently a handful of horses will portray Big Red, not an unusual occurrence when casting animals in a production. An equine casting call for Secretariat was held a few weeks ago, and the response was almost overwhelming.

“We got resumes from more than 700 horses in 40 states and 10 countries,” says Secretariat.com’s Lusky. “The film’s horse wrangler, Rusty Hendrikson, narrowed the applicants down, and you figure by the time we start shooting, it’ll take maybe five or six horses to play Secretariat.” The top 20 horses not chosen for a starring role were retained for competition in the Secretariat Look-Alike Contest, the feature attraction of the Sept. 26 Secretariat Festival. The all-day family-oriented event is held annually at the Bourbon County Fairgrounds in Paris, Ky. 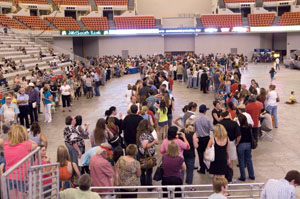 Hundreds of locals turned out Sunday at the Cajundome for a Secretariat casting call.

Although the colt’s legacy is impressive, it stands to reason that much of the movie will focus on Penny Chenery, probably by necessity. There’s only so much stretch-driving to re-create and Secretariat was competitive for just 21 races covering two years. By the time he’d been named Horse of the Year for a second time, he was done racing and headed to syndication. His Triple Crown victories in 1973 will undoubtedly be key elements of the movie’s action, much as Seabiscuit’s match race with War Admiral was in that film. But where that event was held some 70 years ago, Secretariat became a household name fairly recently, and many who see this film will already have fond and ironclad memories of the chestnut colt with the three white socks.

Chic Anderson’s call on CBS television is one of the few moments in sports history that fans will remember forever. Like Al Michaels, who asked us if we believed in miracles on an Olympic hockey rink, or Jack Buck, who couldn’t believe what he just saw as Kirk Gibson rounded the bag after an improbable game-winning home run in the World Series.

Secretariat won the Belmont Stakes by 31 lengths, arguably the greatest single performance ever by a racehorse. It was a happening so dominating that the cameraman had to pan back to find the rest of the field after Secretariat crossed the finish line in 2:24, a world record that still stands today. He established track records at both Churchill Downs and Pimlico Race Course when he won the Kentucky Derby and Preakness Stakes. It’s no surprise that filmmakers wanted to base a movie on Secretariat; the surprise is that it took so long to do it.

Of course, had it happened earlier, before Louisiana’s film tax incentives, Disney and Mayhem Pictures probably wouldn’t be in Lafayette today filming the story of perhaps the greatest racehorse ever. And they wouldn’t be telling the tale of a woman who truly made a difference.

It serves as a reminder that even when you think you’ve lost, good things can still happen. Just ask Penny Chenery