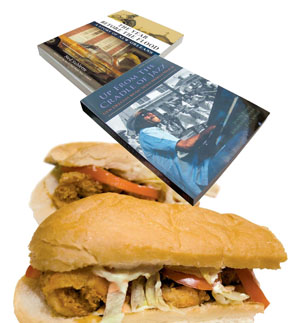 UP FROM THE CRADLE, AFTER THE FLOOD
Author Jason Berry’s Up from the Cradle of Jazz: New Orleans Music Since World War II (with Jonathan Foose and Tad Jones) has been an indispensable guide to America’s most influential musical city’s most influential decades since its publication in 1986. Now, with the fourth anniversary of Hurricane Katrina in the immediate rearview and the city just beginning to reclaim its mojo, the University of Louisiana Lafayette Press has released an updated version of the book, with a new prologue and epilogue reflecting not only the catastrophic effects of the storm on New Orleans culture, but on the culture’s indomitable will to thrive — the nexus where politics failed and culture prevailed, to paraphrase the author. As much a chronicle of the city and its distinct neighborhoods as it is a history of New Orleans music, Up from the Cradle of Jazz is a devotional — written with loving care by a native son — to a great American city and its unique musical gifts. —Walter Pierce

SLOW SHRIMP
There’s nothing better than heading out on the highway on a bluebird day with a destination in mind. Make that a shrimp sandwich in mind. An old school, cooked to order, nice and large, (none of those little popcorn tails) fresh-as-can-be shrimp sandwich. And you don’t even have to get out of the car. This drive-thru joint, right across the service road from Don’s Speciality Meats on Hwy. 1252 outside Carencro, doesn’t have any seats anyway, not even a pic-nic table. You drive up, order, and wait while your shrimp or catfish are battered and cooked. And wait. Bring a book, cause you’re going to be sitting there for about 15 minutes while your lunch is frying. Not a problem in my book, where good food is worth waiting for. But I do have a strategy for rounding out my lunch. Tell the guy riding shotgun with you to get down, walk across the street to Don’s, buy an appetizer link of boudin and a handful of cracklins, a root beer and a praline for dessert. Don’t worry, he’ll be back long before you ever get your poboy. A large shrimp poboy, big enough to split, will run you $10. The kicker? This place is called the ASAP Quick Stop. You might call ahead, 896-3078, don’t know if that will shave off a few minutes or not. — Mary Tutwiler

PRE-K NEW ORLEANS
“The two things always going in New Orleans,” Ned Sublette writes in his new book, The Year Before the Flood: A Story of New Orleans, “are music and murder. You’re always caught between two extremes.” With so many books these days focusing on New Orleans in the aftermath of Katrina, Sublette — a writer and musician who spent a year as a scholar in residence at Tulane University in 2004 — takes readers back to New Orleans pre-Katrina, delving into the music and history that defines the city. Sublette has his brushes with the rougher elements of the city, and develops a classic love-hate relationship with the Big Easy, at one point writing, “You don’t really love New Orleans until you’ve hated it.” The Year Before the Flood retails for $27.95 and is available at major book stores. — Nathan Stubbs