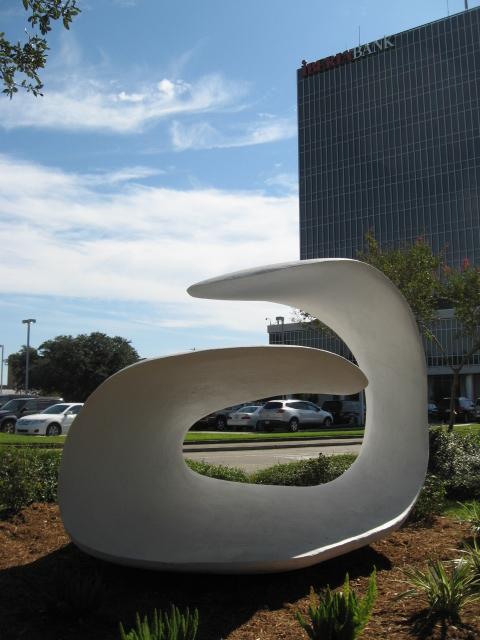 The more than 40-year-old cement sculpture known as Twisted Loop — saved from the wrecking ball when its former location in the old LBA Savings Bank drive-thru on Vermilion Street was demolished last spring — was rededicated in a ceremony Thursday morning at its new location in the traffic island on Congress Street between the Lafayette Public Library and the IberiaBank Building.

Representatives from the Acadiana Center for the Arts and Downtown Development Authority, which spearheaded the sculpture’s salvation, were joined by City-Parish President Joey Durel for the unveiling. “I think when people drive around Lafayette and they see that we take the arts seriously — that we embrace it — ultimately it benefits the entire community,” Durel told the gathering.

“This morning has been six months in the making since we began construction on phase two expansion of the AcA, but it’s really been in the works for more than a decade” said Gerd Wuestemann, the AcA’s executive director. “So, we’re very, very happy that this is taking place.”

The Lemoine Company, which is constructing the AcA expansion, as well as Architects Southwest, the expansion project’s chief architect, donated their services to the relocation of the sculpture, known affectionately among downtowners as “the tongue.” A plaster company also refurbished Twisted Loop’s surface, and local eagle scouts painted it and did landscaping at its new home. “Volunteerism is an amazingly powerful tool for any community, because volunteers pound for pound can do ten times the work in half the time than anybody else,” Wuestemann observed.

Also at the rededication ceremony were Robert Wiggs, the artist who designed Twisted Loop, and Mike and Andreé Stansbury, who help construct the sculpture on-site in 1967. The sculpture, cement and plaster set onto a metal armature, weighs four to eight tons, depending who’s doing the estimating. Wiggs and his wife, Betty, were on hand in May when the piece was removed from the old LBA site.