If shrimpers and processors are going to solve their collective grief, they at least need to start playing nice. 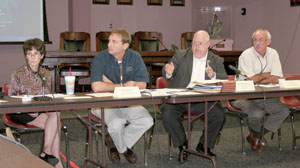 Louisiana Shrimp Task Force members heard the usual clarion calls for new branding techniques and increased inspections last week, but their regular meeting also gave way to sometimes-bitter exchanges between harvesters and processors. The bad blood between commercial shrimpers and the outfits that buy what they pull in runs deep and is firmly rooted in money.

Some fishermen believe these industry middlemen are fixing prices and conspiring to drive down dockside prices. Many are also still smarting that processors, of which there are now about 17 in Louisiana, have received double the amount of money as compared to fishermen from a federal tariff on imported shrimp — a battle that was waged nearly a decade ago for a tax that’s no longer being collected. “That’s what we got for working together,” shrimper Ronnie Anderson of Houma told the task force during the public comments portion at the meeting’s end.

About an hour prior to that, as the task force handled its regular agenda, Anderson attempted to show members a set of photos he alleged contained proof of wrongdoing by a processor and involving packaging. The move quickly drew Eddie Hayes, an attorney for the American Shrimp Processors Association, to voice an objection from his seat. “I’m not your lawyer,” Hayes told Anderson, “but I would not advise you to do that.”

Another just as intense — and obscure — moment occurred after Danny Babin of Houma, who represents processors on the task force, asked that an opinion from the Attorney General’s Office be requested on whether a processor could stop doing business with a harvester involved in a lawsuit alleging price-fixing. “I don’t want to pay someone who may be suing me,” Babin said of the request, which was unanimously endorsed by the processor advisory panel he represents.

Wildlife and Fisheries Assistant Secretary Randy Pausina said he heard stories about shrimpers — there are roughly 3,000 licensed in Louisiana — meeting with a law firm regarding what he thought could potentially be a “class action.” When he asked if any of the shrimpers present would be willing to divulge something regarding the gatherings, loud and deliberate chuckles erupted from the middle of the audience where shrimpers sat huddled together. But no answer was provided.

State Rep. Truck Gisclair, D-Larose, told task force members later that the New Orleans law firm of Herman, Herman, Katz and Cotlar had recently met with shrimpers at the Larose Civic Center and asked them to bring three years’ worth of trip tickets, which reveal catch totals and other relevant information. “They were on a fact-finding mission,” Gisclair said with a laugh.

In related action, the task force heard a list of ideas that could result in legislation during next year’s regular session. Commercial fishermen have been protesting and lobbying elected officials to do something about the low price of shrimp, which is chiefly being driven by imported product. While that’s clearly a federal issue, there are a number of proposals being floated that could be addressed on the state level.

Processors, for instance, voted to request legislation that would increase the shrimp excise tax by 25 cents a barrel to go toward marketing efforts and to require restaurants to disclose where their shrimp come from on their menus. Harvesters, meanwhile, want the state to increase funding for testing imports for health reasons, a well-known argument mounted against foreign shrimp producers.

Gov. Bobby Jindal created the Louisiana Shrimp Task Force last month, and it had only met once before last week’s meeting. During this interim, two of its subcommittees — the Shrimp Harvester Advisory Panel and Shrimp Processor Advisory Panel — also met for the first time. It was clear during this week’s meeting, however, that the harvesters and processors had not yet sat down together. “There’s nothing stopping the two advisory panels from meeting,” Pausina said after an off-the-cuff exchange between Anderson and Babin over prices.

No formal date was set, or agreement reached, but both sides expressed a willingness to try and work together, despite animosities and what has become generational angst. “I think most people should realize that it took us almost seven years just to get to this point where we’re talking,” said Lafitte fishermen Clint Guidry, who represents shrimpers on the task force. “This is our last hoorah. What we do here determines whether we have a shrimp industry to give our children.