A new wireless pacemaker uses the Internet to trigger immediate medical care if something goes wrong. 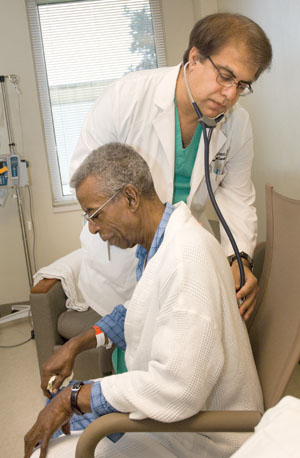 When Charles Watkins Sr., falls asleep at night, he knows he has an angel on his nightstand.

His angel is the monitor to his Merlin wireless pacemaker, the first of its kind in Acadiana.

“At 78, it was quite a privilege to utilize this kind of equipment,” Watkins says.

Watkins arrived at the hospital complaining of “shortness of breath and being very weak.” Doctors diagnosed him with atrial fibrillation, a condition that occurs when the heart’s two upper chambers beat out of rhythm with the lower chambers, or ventricles; and sick sinus syndrome, also known as sinus node dysfunction because it involves rhythm problems related to the sinus node, which is the heart’s natural pacemaker.

Because of Watkins’ history of heart problems, including a heart attack in 2004 at a church convention in Memphis, Tenn., Fazal and other doctors decided he needed a pacemaker. Doctors had already scheduled the wireless pacemaker to be surgically inserted into a patient the next day, but decided that Watkins had a more immediate need.

The wireless device allows a patient’s heart condition to be monitored remotely by a physician, who can respond immediately if something goes wrong with the heart or the device. When a patient is asleep, the wireless monitor on his nightstand keeps a close eye on his heartbeat, and if any irregularities are detected, a transmission is sent to the manufacturer of the pacemaker, which alerts the hospital via fax that the parameters regarding rhythm or other factors have been exceeded. The doctors then access the company’s database and check to see what the irregularities are so they can contact the patient and act accordingly.

Mere days after doctors released Watkins, the monitor noticed an abnormally fast heartbeat while Watkins slept. Once Fazal was automatically notified, he called Watkins to check up on him. He asked Watkins how he felt and Watkins said he felt good. Still, Fazal didn’t like the fast heartbeat and wanted him to come in.

Watkins went back to the hospital, where the doctors diagnosed him with tachycardia-induced cardiomyopathy, which is the weakening of the myocardium, the muscle of the heart, due to a prolonged fast heart rate; his heart rate had jumped to 140 beats per minute. Doctors changed his medication and after a few days released him.

With the older pacemakers, the first post-op checkup typically takes place after about three months and sometimes six months, which means an occurrence like Watkins’ may have gone unnoticed — with possible fatal results. If a company wanted to conduct research on a new type of pacemaker, the patient would have to make return visits weekly, all on the company’s dime.

The wireless technology now allows for patient freedom and independence, what Fazal considers the most important element of the whole procedure. It allows a person with a pacemaker to go on with everyday life without constantly worrying about his heart, because the monitor alerts the doctors to any irregularities in patients’ heart rates.

“That patient doesn’t need to do a follow-up [with] this pacemaker anymore,” Fazal says.

Also new is the fact that anyone with an older pacemaker can have his changed to a wireless one. The FDA mandated that all companies that produce pacemakers standardize the leads. If a patient wishes to do so, doctors can replace the battery casing, which houses the battery and all the necessary circuitry, from their old one with the new Wi-Fi pacemaker; think USB drives, which can be used on all computers.

Watkins’ heart’s electrical system also experienced problems. The electrical system sends out signals for when to pump blood, and when the system goes haywire, it can throw off blood flow, leading to potentially fatal consequences.

With new Wi-Fi technology, however, comes new problems. People who had older pacemakers were not able to go near a microwave or use cell phones for fear the waves emitted would cause the pacemaker to restart or misfire. Advances in technology have erased those fears, but Fazal says some pacemakers are still susceptible to arc welders, which can also cause a pacemaker to malfunction.

According to a March article on Wired.com, researchers at the U.S. Medical Device Security Center found that the Wi-Fi pacemakers can be hijacked by someone using a specialized radio kit. The Wi-Fi signal is unencrypted, so someone nearby could turn it off completely or send a shock to the heart, causing cardiac arrest. Fazal says he is not surprised, “I’ve never heard it happen, but yes it’s possible.”

St. Jude Medical Center developed the wireless pacemaker, and it received FDA approval in July, just weeks before 61-year-old Carol Kasyjanski had her 20-year-old pacemaker replaced with the new version. Kasyjanski told Reuters Television the device has given her renewed confidence and a new lease of life, because if her pacemaker were to malfunction or stop working, only immediate action would save her life.

Because the new technology helps doctors better treat patients, Fazal and others believe it will likely become the new standard in pacemakers.

The server and the remote monitor communicate at least once a day to download all the relevant information and alert the doctor and patient if there is anything unusual.

It’s peace of mind for people who require a pacemaker to live the kind of normal life most of us take for granted. “It’s amazing,” Watkins remarks. “That’s all I can say.”