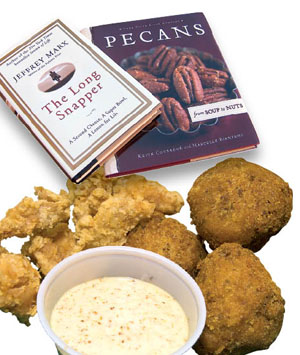 SNAP SHOT
At age 38, Brian Kinchen thought he was done with football. The LSU alum was three years retired from a journeyman’s career in the NFL and had settled down in his hometown of Baton Rouge with four kids and a job as a 7th grade Bible teacher. That’s when the New England Patriots called. In The Long Snapper, Pulitzer-Prize winning author Jeffrey Marx chronicles Kinchen’s improbable return to football in the obscure position of long snapper for the Super Bowl champion Patriots in 2003. An inspiring story of life’s second chances, The Long Snapper retails for $24.99 and is available at most major book stores. — Nathan Stubbs

GRIDIRON GRUB
Young’s Sports Grill in Broussard (the old Como’s Icehouse), which held its grand opening last weekend, has all the perfect apps while watching football on its goal post-framed big screen TV. Cajun fans may want to try the “Ragin Cajun Crawfish Balls”:  Louisiana crawfish, green onion, garlic and spices breaded and deep fried for $8.99. And for Tiger fans looking to indulge in the ritual eating of the opposing team’s mascot for this weekend’s Florida game, there’s “Tiger Bait,” fried alligator bites for $9.99. Young’s is located at 305 E. Main Street in Broussard. Call 330-2900 for more info. — NS

GO NUTS
Keith Courrégé cracked the nut in 1984, penning the first edition of Pecans from Soup to Nuts. Reprinted several times since then, the 2009 release from Pelican Publishing is more than an update. Jady Regard, Courrégé’s grandson and president of Cane River Pecan Company, persuaded cookbook author extraordinare Marcelle Bienvenu to pick up the pieces and shell out a new version of the old chestnut. It’s a winner. There’s classics like buttery cheese wafers with pecans and pecan pralines. But look for surprises like onion soup with pecan crust, chili-roasted sweet potatoes with chopped pecans, stuffed pork chops with asparagus and pecan butter and a fig preserve cake with pecan icing. The pictures are mouth watering, the recipes simple and straightforward. So get you out in the back yard and start pecan-picking, you’ll need a sack full to cook your way through this book. Pecans from Soup to Nuts lists for $19.95 at real and virtual bookstores everywhere. — Mary Tutwiler