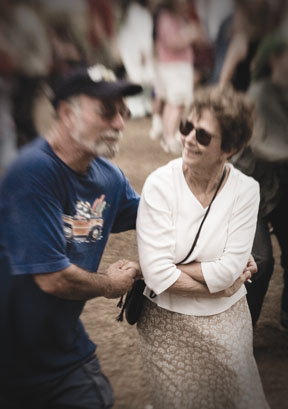 There’s more to do than a body can hope to achieve this weekend in Acadiana.

Starting at 11 a.m. today, Les Freres Michot will fiddle up some traditional Cajun music at Bach Lunch, in Parc Sans Souci, downtown Lafayette. In conjunction with Bach Lunch, at 11:30, the traditional Cutting of the Boudin, the opening ceremonies for Festivals Acadienes et Creoles will take place.

Stick around downtown. At 2 p.m., Québecois filmmaker André Gladu will present excerpts from the film La Veillée des Veillées, based on the historic concert that he organized in Montréal in 1975, which helped to launch the career of a young Zachary Richard, and also presented Marc Savoy, Lionel Leleux, Don Montoucet and D. L. Menard, along with musicians from all over the French-speaking Americas. He will also present three episodes from his landmark series, Le Son des Français d’Amérique, including “Réveille,” which also featured Zachary Richard, who will be on hand to participate in the discussion with Gladu. This presentation will be followed by a reception at Lafayette’s International Center, in collaboration with the Québec Government Delegation in Atlanta, from 5-6:30 p.m. . Gladu’s films will also be playing in a special tent during the festival, on Saturday and Sunday afternoon.

Then amble over to Parc International for a Downtown Alive! special festival performance. Feufollet and a special guest will kick off DTA, followed by a Cajun Country Homecoming featuring Doug Kershaw, Jo-El Sonnier, Jimmy C. Newman.n

Saturday morning at 10 a.m., Festivals Acadiens et Créoles commences in Girard Park. Check out the Web site for a schedule of music, food, crafts, dance and a chance to become a festival sponsor. The festival continues through Sunday.

Down in New Iberia, the 20th annual World Championship Gumbo Cookoff takes place in Bouligny Plaza. Music, crafts, food of all sorts except Gumbo is on tap for Saturday, and on Sunday, be prepared to taste some of the best gumbo in the land.

Come nightfall, all three nights, clubs around town will be jammed and jamming. Check The Grid (click Calendar, then Grid) at The Ind for detailed info.