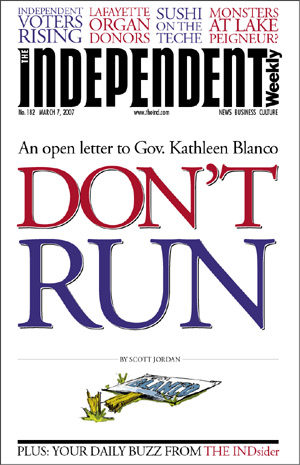 It was your inauguration day and a historic moment for Louisiana, as you became the state's first female governor. You deserved the honor. You built upon an honorable lifetime of public service and defied the oddsmakers in the 2003 governor's race that predicted you couldn't defeat Bobby Jindal. That campaign crystallized an image for a majority of Louisiana voters of a proud woman, a champion of the less fortunate, a tireless worker and a family matriarch who'd persevered personally and professionally after the tragic loss of one of your sons, Ben. The cornerstone pledges you made in your campaign ' an overhaul of our broken health care system, a commitment to improving our woeful education rankings, and a proactive stance on business recruitment and economic development ' were admirable, lofty goals vital to the prosperity and advancement of our state.

You were at the height of your power. After taking office as governor, you quickly earned the nickname Queen Bee for the way you dealt with legislators who didn't support your incoming vision and programs. Underneath that gentle Cajun grandmother persona was a shrewd politician who had a huge voting base in New Orleans, a network of supporters in the Capital City, conservative allies in north Louisiana and a respectable level of hometown support in Lafayette and Acadiana. At that moment in time, you were a formidable opponent for any challenger if you ran for re-election in 2007.

So much has changed since Aug. 29, 2005, and the arrival of Rita a month later. The stark reality in the numbers is still overwhelming. More than 200,000 homes and rental units destroyed or damaged. The population of New Orleans still hovering around half of its pre-storm population. The inequities of the state's public school system and health care system laid bare for all to see. And the endless battle between Louisiana residents and insurance companies ' disputed damage claims, increased premiums, dropped coverage.

You hold the most powerful elected office in the state. Before, during and after the storms, we have looked to you for reassurance, guidance and leadership. We know that Katrina's force and magnitude and the U.S. Army Corps of Engineers' decades-long ineptitude destroyed the levees, leaving federal, state and local government overwhelmed in the hurricane's darkest hours and aftermath. And we know that you endured the worst kind of ugly, unwarranted partisan smears in the aftermath of the storm ' a time when nothing should have trumped unity and concern for the safety and welfare of hurricane victims.

In the face of the tragedy and hardship that came out of Katrina and Rita, Louisiana residents and voters have become involved in the political process like never before. We are tired of Louisiana's recovery languishing in bureaucratic red tape and ineffective policies. What was once a wink-and-a-nudge Louisiana tradition ' laughing and groaning at colorful or corrupt politicians ' is no longer funny, and never will be again. The federal government and unsympathetic national pundits and onlookers have used the state's history of political corruption as a roadblock for federal funding and continued support for the rebuilding effort. We can't continue to let this happen.

Governor, you're respected by many. You've served honorably. It's the highest compliment that few would call you colorful. The election for governor this autumn is arguably the most important election in the history of Louisiana. That's why I'm writing to ask you: Please don't run for re-election. Drop out of the race ' and sooner rather than later. It's the best thing for our state's future and reputation.

This letter is NOT an endorsement of any other candidate ' Republican, Democrat or Independent, declared or rumored ' for governor in 2007. There are nine months remaining for a lot of hard questions to be asked about every candidate's qualifications, positions on issues, campaign contributors and more.

You've proved the naysayers wrong before; triumphing this time around would be the ultimate validation of your ability to overcome adversity. You have $3 million in the bank ' a formidable sum ' to fund a campaign, and you've said that money gives you the opportunity to tell your side of the story.

You've been telling your side of the story for 18 months post-Katrina ' but too many people in Louisiana have stopped listening. In the most recent January poll by Southern Media and Opinion Research, you trail Republican Rep. Bobby Jindal 59 percent to 35 percent.

This is not the 2003 election, when you overcame a single-digit deficit to win. This is 24 points.

Your re-election campaign is futile, in my opinion. Just look at what happened in the November special session; your plan to raise the state's $194 million spending limit was blocked at every turn and went nowhere. Your opponents know you're mortally wounded and are acting accordingly, and the upcoming April legislative session likely won't be any different.

Before your poll numbers started dropping precipitously, you realized you had one chance ' a possible golden ticket, even ' to re-election. While President George Bush showed indifference and New Orleans Mayor Ray Nagin showed incompetence in the rebuilding efforts, you realized that the No. 1 issue facing Louisiana was helping displaced residents get back into their demolished or damaged homes. People needed a strong, cohesive plan that would help them rebuild their homes and stay in Louisiana.

You created the Road Home program.

No more waiting for everyone else to lead; this was your program to cut through all the problems and put hurting residents back in their houses. You made sure that everyone knew that the program was your initiative, even putting your name on advertisements for it.

You staked out your turf in dramatic fashion, making it unequivocally clear that the program's failure or success didn't depend on New Orleans legislators or the federal government. This was your Road Home program, your solution.

Let's not mince words: The Road Home has been a disaster.

It's easy to try and blame the problems on ICF International Inc., the contractor you hired to administer the program. ICF's proven to be incompetent and unworthy of earning The Road Home contract valued at up to $756 million. Post-storm fingerpointing, however, is getting tiresome. We're exhausted with the rhetoric and want accountability.

Governor, you may have $3 million in the bank for your re-election campaign, but how can you possibly explain or escape The Road Home debacle? ICF miscalculated homeowners' pre-storm property values. Its response time to phone calls and e-mails from grant applicants has been horrendous. ICF reps have given out conflicting and incorrect information.

With all due respect, how can you possibly explain this in your re-election campaign? For all your post-storm successes ' most notably getting the Superdome rebuilt and open in record time ' there simply isn't any reasonable, acceptable answer to justify the failures of The Road Home program. Once the campaign season starts in earnest, you will be asked relentlessly about it. Every one of your post-Katrina moves and decisions will be campaign fodder. You'll have to relive the nightmare of the partisan attacks on the semantics and timing of your aid requests during Katrina. Calling for an investigation last month into disgraced former FEMA director Michael Brown's recent comments about the White House's politicizing of Katrina came off as too little, too late, a desperate move that was another blow to your credibility.

It's time to face political reality. The voter demographics that propelled you to the governor's office are gone. Your New Orleans voting base is displaced, longtime Baton Rouge and Acadiana supporters are disillusioned, and Democratic challenger Foster Campbell and Republican challenger Bobby Jindal are siphoning off your north Louisiana voters.

Given all those factors, why would you want to stay in the race?

Pride is the only answer. Telling your side of the story is one last chance to rehabilitate your image.

But there is no shame in not running for re-election. You're 64 years old, and you've endured the physical and emotional toll of governing during the biggest disaster in U.S. history. If you drop out of the race now, you will encourage a new slate of challengers to enter the race and present Louisiana voters with their platform for moving the state forward. More than anything, that is what Louisiana needs right now. We need every voice, every option and every idea on the table.

If you stay in the race, your formidable $3 million war chest is going to dissuade qualified, legitimate candidates from entering the field. Bow out gracefully, and you can still wield your influence on the election behind the scenes. If you are genuinely committed to keeping the governor's office in Democratic hands, you can use your decades of experience, contacts, and get-out-the-vote initiatives to help another Democratic candidate. A candidate with a much better chance to win than you do.

Time is of the essence. The longer you stay in the race, the longer it will take for other candidates to declare their candidacy and present their platform to the public.

That's why I'm asking you not to run for re-election.