Sculptor John Geldersma returns to Louisiana with a powerful exhibit that explores the emergence of consciousness. 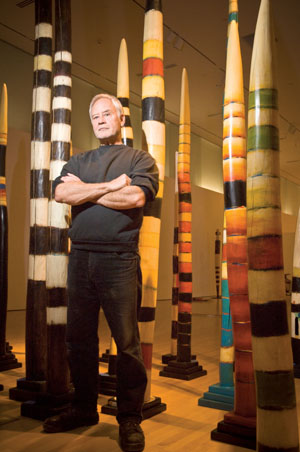 John Geldersma is quick to lead you around the room, explaining the purpose of his totemic sculptures, inverted poles that stand like serpents rearing on their tails which have sprouted archaic geometric heads. “See that slit?” He points to a vertical slot carved into the head of a piece. “It’s a sight.”

I’m standing in the big gallery of the Acadiana Center for the Arts, dwarfed by tall wooden poles and what seem to be anthropomorphic figures, though referring to Japanese, west African or Cycladic tradition, I’m unsure. “An insight?” I’m wondering, but he’s speaking of celestial cosmology. One must sight, as through a rifle, a second of Geldersma’s carvings, but the sculpture won’t be finished until, like some modern version of Stonehenge, a celestial body, orbiting into the sight line, completes the work.

This is art at its most dynamic, driven by a mechanism beyond man’s control, created, Geldersma says, through the unconscious attempting to transcend into a place of understanding. These pieces belong on a hilltop, facing the rising sun, and in actuality were created in the open landscape of Geldersma’s home in New Mexico. But the western work is merely a continuation of his swamp sculptures — tree trunks carved, burned, painted and burnished in the home he once worked in at the edge of the Atchafalaya Basin.

A native of New Orleans, Geldersma, a youthful 67, still sports his West Bank accent. His first medium was the driftwood that washed up on the batture of the Mississippi River. As a student in the art department of USL and later a teacher at the university, he turned to the likeliest lumber at hand, downed cypress and pecan from the hardwood bottomland of the swamp. In a house he wrought from an abandoned cotton gin located on the edge of the great swamp, Geldersma inhabited the land of gris-gris. Some of the work from this period, the 1960s through the ’80s — great winged totems trailing mantles of roots, grass, bone and snakeskin — have been gathered for the one-man show at the AcA. Not only the inhabitants, but the sacred grove itself, a forest of Geldersma’s pointed and painted spirit poles grow in the gallery.

It’s an energetic collection of sculpture. Wooden poles split by nature, their chinks and checks recognized by Geldersma as places where spirit resides, seem to sprout, like bamboo shoots, growing 3 feet tall, overnight. Another grouping, “fragments,” he calls them, look like a picture cut apart and put, by a crazed puzzler, back together.

He looks at his own work with a sense of bemused surprise. “I don’t make snakes anymore, but look at this one.” Titled “serpent emerging,” the snake, carved from heavy sinker cypress, winds upward, its jaws clenching a diamond-shaped object, painted red. The red diamond pierces an oval divided into two hemispheres; beneath the darkness, above the light. “The snaking skeleton is the same shape as a human in its embryonic state,” says Geldersma. He sees the work as the primitive energy of the unconscious traveling up the spine from the tail to the head. The red diamond is a dynamic force piercing into the brain, the sun, the conscience. These works embody the language of the psyche, be it a shamanic journey from chaos into consciousness or the snake’s winding way through kundalini, the “coiled” path, to enlightenment. Some heavy stuff from a south Louisiana guy as renowned for his partying as his spirituality. It’s a must-see show, energy in motion, filled with the juju that flows through us all.