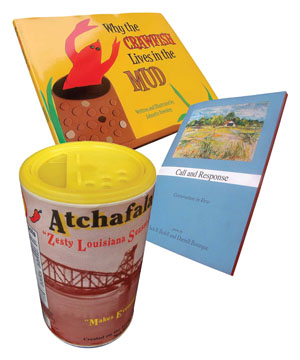 CALL AND I’LL ANSWER
We know harmony when we hear it, two lyrical voices twined. But Call and Response is a different kind of song line. Darrell Bourque and Jack Bedell have created a slim book of poetry, Bourque tossing out a line, Bedell, hooked, responding. Bedell teaches at Southeastern, in Hammond. Bourque, a former UL humanities professor, is Louisiana’s Poet Laureate. When Bedell was struggling to recover from West Nile virus, he reached out to Bourque in a way that writers do, knowing creating a poem is the equivalent of breathing. The pair conceived an exercise that grew into a work of art, circumnavigating the world from the tiny observation — Albrecht Durer’s The Great Piece of Turf, to the description of time/space curving from the bow of Einstein’s violin. Mostly, though, what the two men talk about in their lyrical conversation is the land, light and love. Sometimes sonnet, occasional haiku, the book is a garland made of the waters and fields of Acadiana, the places that live once in memory, and now again in this book. Bourque and Bedell will be reading and signing books at the Acadiana Center for the Arts, Saturday, Oct. 24, from 6 to 8 p.m. — Mary Tutwiler

TIS THE SEASON
Atchafalaya Blend seasoning is to cooking what winning is to an ailing football program and what coffee is to an early morning grind: It makes everything better. The blend has been the secret weapon of the Ryder family for generations, advertising itself as having “originated among the squatters who settled on the banks of the Atchafalaya River at Melville, La., and made their living fishing on the river.” Atchafalaya Blend seasoning is available locally at Champagne’s. Visit www.atchafalayablend.com for more information. — Nathan Stubbs