For veteran independents like Frank Harrison, the ongoing cap-and-trade debate marks a change in political pressure, although the oil and gas industry has been here before. 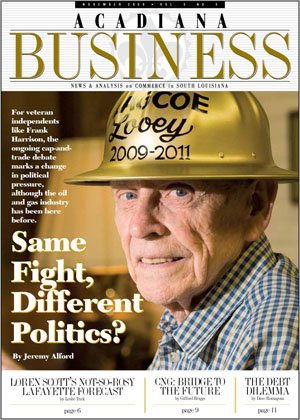 Dwight D. Eisenhower was in the White House when Frank Harrison, now 80 years old, decided to become an independent oil and gas producer. Eisenhower was rather popular with voters during his time in office and, surprisingly, carried four southern oil-rich states in 1952, including Louisiana by a comfortable margin — the first time the Bayou State had voted Republican in a presidential election since the end of Reconstruction. The decorated general even had strong support in Lafayette and across the rest of Acadiana as well.

Oilmen couldn’t have asked for a better president. It was as if Eisenhower had been born to protect the nation’s private energy interests. Every appointment he made to the Federal Power Commission, except one, was pro-industry; the one that wasn’t, William Connole, was eased out after his term expired. Oil lobbyists had space inside the White House to work on policy.

But that doesn’t mean Louisiana’s oil interests didn’t have to fight Eisenhower for what they wanted. In 1956, the year Harrison moved to Lafayette from New Orleans, Eisenhower vetoed legislation that would have ended all federal price controls over natural gas. He later cited in his diary that “immoral lobbying” on the part of Big Oil prompted the veto. Some, however, question Eisenhower’s motives: He signed an executive order his final full day in office that reportedly benefitted a sole oil and gas producer, Cities Service, a major donor to his campaign. Three months later, CEO W. Alton Jones was flying to Palm Springs, Calif., to visit the retired president when his plane crashed. A briefcase was recovered. It held $61,000 in cash and travelers checks, according to 1968’s The Case Against Congress, a book written by two aggressive reporters who Eisenhower never legally refuted.

“One way or another, the government has never been as supportive of oil as it should,” Harrison says, adding that the industry was angered over Eisenhower’s decision. He also recalled that oil at that time was “considerably low, like $3 a barrel.” (Harrison’s memory is remarkable; the per-barrel nominal price in 1956 was $2.94.)

Harrison, a man so positive in outlook that he named his business Optimistic Oil Company, has reason to reflect on his long and storied career. He’s this year’s LAGCOE Looey, the top honor bestowed by the show, which is the country’s 2nd largest energy exposition. The first LAGCOE Looey was hard-hatted at the inaugural show in 1955, serving as an affable representative for what he dubs the “Working Man’s Oil Show.” Harrison was born into the industry, over in Bastrop — his father was employed by Union Producing Company and today his son is a partner in Houston Energy LP — and has gone on to author and present 15 geological papers to respectable acclaim.

That also means Harrison was born into the business of politics, which goes hand-in-hand with the oil business. He can recount the era of Jimmy Carter, when the oil depletion allowance was removed, which had a profound impact on investment dollars. Then he fast-forwards to the Reagan years, when gas was deregulated, which stimulated an increase in capital for producers. And on it goes, from one president to another, all in some form leaning down on the industry. “It seems like the government has always been looking down and from the standpoint that there’s something suspect about the industry,” Harrison says. “And the independents really seem to shoulder the brunt.”

When he received his gold hard hat earlier this month from LAGCOE, Harrison added that there are folks in the industry trying to keep the nation’s interests in mind, but they never get the credit they deserve. “The only direction we’ve ever gotten from Washington is to keep energy cheap, and we’ve been able to do that so that the U.S. economy could become the greatest society the world has ever known. I’m proud to be in an industry that helped make that happen,” he says.

Today, the political climate is dramatically different from anything Harrison says he has seen. And it all starts at the top, with President Barack Obama, unquestionably Enemy No. 1 for the industry. “Obama still has a long way to go, and I think the only similar comparisons I can make is to Jimmy Carter, who eliminated depletion allowances and created a real shortage of natural gas,” Harrison says. “I think President Obama’s policies relative to alternative sources are going to be tough. I just don’t believe we can meet our energy needs through these plans. Oil and gas has to be the foundation of our energy needs.” 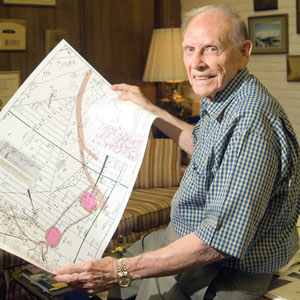 Refusing to retire at age 80, Optimistic Oil’s Frank Harrison has been studying oil and gas prospect maps for more than five decades.

While there are a number of energy-related bills brewing in Congress, among the more controversial for Louisiana is legislation that would reduce the pollution counts connected to global warming and increase the nation’s reliance on cleaner energies that are significantly more expensive than conventional means. In the U.S. House, lawmakers have already given their approval to H.R. 2454, the American Clean Energy and Security Act — a volatile measure also known as the Waxman-Markey Climate Bill and more generally as the “cap-and-trade bill.”

A Senate version is in the works, and hearings are expected to kick off the week of Oct. 26. Democrats are pushing the concept, and Republicans holding back, but the formula breaks down when it comes to the Bayou State, where lawmakers are hesitant to buck the oil-and-gas traditions that have brought Louisiana generations of fortunes. The White House argues that the legislation would create millions of green jobs and move the nation toward developing more fuel-efficient vehicles and using renewable sources like wind, solar, ethanol, hydroelectricity, nuclear and others.

Inversely, that would also mean moving the nation away from Louisiana staples such as oil and gas, as well as other fossil fuels like coal. U.S. Rep. Charlie Melancon, D-Napoleonville, who represents portions of Acadiana, says he opposes the proposal and voted against it because it “would hurt my district and the people I represent” and could even damage the oil and gas industry.

Melancon, however, was successful in including an amendment to the House bill that would protect Louisiana’s share of wetlands restoration funding from cuts indirectly caused by hurricane disaster assistance. “Rising sea levels and more frequent hurricanes are serious threats to south Louisiana, threats caused by climate change,” Melancon says. “We must work together as a nation to reduce the pollution causing this climate change, but not on the back of our energy industry in Louisiana.”

Here’s how the core concept of the bill would work: the American Clean Energy and Security Act would create a market-based cap-and-trade system under which industries and utilities would buy carbon “allowances” from the federal government. Businesses and utilities that reduce their carbon output below the cap would then be able to sell their extra allowances to businesses that exceed the cap.

The federal government would also distribute to each state a share of the proceeds from the sale of the allowances for the states to use for wildlife and natural resource protection and also for domestic adaptation purposes, like wetlands restoration, to reverse the effects of climate change.

Even though there is that boost for Louisiana, U.S. Sen. Mary Landrieu, D-New Orleans, said in a prepared statement that it’s unlikely to get her support in the Senate. She says the House-passed cap-and-trade bill “disproportionately penalizes the oil and gas industry and would ultimately result in less domestic energy production at a time when our nation should be producing more.”

Sen. David Vitter, R-Metairie, says instead of increasing energy production, President Barack Obama has presented a bill that’s similar to one that failed miserably in the 1970s era. “Everyone agrees that we need to do more to create a cleaner and greener world for our children,” Vitter says. “But this proposed cap-and-trade policy to reduce emissions creates regulations so severe that the burden on medium-sized and small business will be stifling and will overflow to consumers — by some estimates raising costs to the average family by more than $1,000 a year and costing us thousands of jobs.”

THE NEED TO BE CLEAN

Of course, not everyone is opposed to the concept. Local community leaders and activists have been rallying behind the legislation for months. Jonathan Henderson, a spokesperson for 1Sky and the Gulf Restoration Network, local advocacy groups, says the clean-energy bill is the best chance for moving Louisiana to a greener economy and protecting its coastal communities from sea-level rise.

Katherine Trotter, a research analyst for the Louisiana Bucket Brigade, says that the Bayou State has 17 oil refineries that contribute to global warming on a daily basis. “This energy bill includes a provision to reduce global warming emissions from industry sources including oil companies,” she said. “We have a real problem, and this bill will help to solve it.”

National environmental groups are falling in line as well. “Doing nothing is not an option,” says Jordan Macha, conservation organizer for the Sierra Club. “Doing nothing threatens our air, our water, our food and our health. We need to act now to protect our environment and to protect the health of our children and grandchildren.”

Nonetheless, the conventional wisdom on cap and trade in the state’s congressional delegation mirrors what Don Briggs, president of Louisiana Oil and Gas Association, has been preaching since Obama unveiled his goals for a “Green Energy Economy” when he took office earlier this year. “The American Clean Energy and Security Act of 2009 is an asinine, 946-page piece of legislation,” Briggs says. “The bill will not create millions of new green jobs and a new economy; in fact, it will do the opposite. If there is going to be a climate bill Congress has a lot of work to do in getting it right. Under the bill, our nation’s energy and economic security is at risk.”

As for Harrison, he says Briggs’ assessment is dead-on and argues that cap and trade could dry up investments faster than anything else he’s seen during his more than 50 years as an independent oilman. “This by far would have the most profound impact on the industry than anything else that has come around,” he says.

Harrison says young men and women entering the industry today have an advantage in all of the resource plays available, like the historic Haynesville Shale discovery in north Louisiana. Risk is low and returns are fairly reasonable, but it’s only one aspect of the business. There’s also the business of politics, which is dramatically different today than when Harrison first put on his hard hat. Maybe that’s why he sometimes thinks — but not all the time — he had it easier when he cut his teeth during the 1950s. “It’s difficult to say, because things change, but I would suspect it would be harder for an upstart today to get into the industry and find backers and operate,” Harrison says. “There’s a great deal of uncertainty, and that has a lot to do with politics.”