More than 900 energy-related businesses in Lafayette Parish, significantly more than any other parish in the state, stand to lose big if the Obama administration has its way.

Lafayette has more energy-related businesses than any other parish. 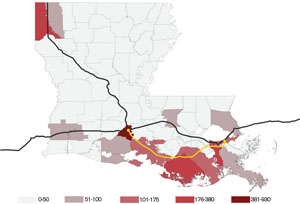 So far, we’ve been relatively lucky in Acadiana when it comes to the national economic slowdown andsomeindicators are showing that the end is in sight. Why, then, is there growing concern over the future of business and industry in Lafayette, Acadiana and Louisiana? It’s because of potential federal legislation including the elimination of billions of dollars of incentives from U.S. natural gas and oil producers and cap and trade that will deal a blow not only to Louisiana’s energy industry, but potentially to every business with ties, direct or indirect, to the industry.

In a nutshell, if passed, the proposed federal budget would provide for a $33 billion dollar tax increase on the nation’s oil and natural gas producers via the elimination of incentives that are critical to the energy industry, some of which have been in place since about 1910. The removal of certain incentives and the addition of new fees and taxes will cause a severe decrease in exploration and production of oil and gas in the U.S. This would lead to losses of thousands of jobs in Acadiana, a sharp increase of the cost of fuel and energy for the entire country, and would increase our reliance on foreign oil — all contrary to what the administration says it wants.

Part of the problem lies in the misconception that the major oil companies make up the entirety of the oil and gas industry, when in fact, thousands of independents are responsible for the majority of the oil and natural gas produced in the U.S. Will these proposed taxes affect the majors? Of course. Will they put the majors out of business? Unlikely. The majors can and have moved headquarters and exploration to other countries, leaving domestic small and medium-sized operations to bear the brunt of this burden. Despite rising oil prices and the opportunities with deep water and shale exploration, many local companies are being cautious and have already slowed down their exploration and production programs because of the potential federal legislation.

The cap-and-trade program we have been hearing so much about recently has the goal of reducing carbon emissions and therefore, slowing or stopping, global warming. The program works by limiting (capping) how much carbon a company can produce. Companies or entities are in turn issued emission permits and are required to hold an equivalent number of allowances that represent the right to emit a specific amount of carbon dioxide. The total amount of allowances and credits cannot exceed the cap, limiting total emissions to that level. Companies that need to increase their emission allowance must buy credits from those who pollute less. The transfer of allowances is referred to as a trade. As time passes, the government would reduce the number of permits available, thereby forcing the companies to reduce emissions.

This plan may work to lessen emissions eventually, but it won’t be cheap. Companies are not going to just absorb the added expense of the program. This is a capitalistic economy, and as happens in similar situations, the additional costs will be pushed down the line to the end consumer, you and me, in the form of higher electric bills, more expensive gasoline, not to mention increased costs of nearly every manufactured good, from food to automobiles. That’s if the company even decides to participate in the program. The very real possibility exists that businesses may leave the country to continue operations in countries that do not have similar policies in place, again costing jobs and decreasing U.S. productivity.

Earlier this year, LEDA researchers compiled the “America’s Energy Corridor” report to support the efforts for the upgrade of Highway 90 to interstate standards. The final report gave definitive numbers to some anecdotal accounts we’ve heard about the energy industry for years.

Highway 90 runs 140 miles from Lafayette to New Orleans and passes through nine parishes. Although the corridor is rather small in geographic size, the amount of labor and capital investment makes it the most important industrial corridor in Louisiana. Nearly 2,000 oil and gas companies operate within the corridor ranging from small businesses to companies with 3,000 employees, with 4 percent of all U.S. energy laborers working within the corridor. This says a lot for south Louisiana’s importance to the nation’s energy exploration, production and delivery chain.

One of the most impressive items to come from the report is illustrated in the accompanying map. There are more than 900 energy-related businesses in Lafayette Parish, significantly more than any other parish in the state. Historically, this has been our competitive advantage. Nearly 25 percent of Lafayette’s workforce is employed in wealth creating industries (mining, manufacturing, construction and information). This is well above state and national employment numbers for the same industries. The main driver in Lafayette’s wealth-creation, that which gives us an edge over the state and nation, is the energy industry. It employs more than 11 percent of our parish workforce (LA- 2.8 percent and U.S- 0.55 percent). It’s not the largest single employing industry in the parish (health care is), but energy is still a huge driver of our economy. If production continues to slow and layoffs occur, Lafayette and Acadiana will lose our competitive edge.

Fortunately, most of our congressional representation understands the devastating impact these proposals could have on the state. When surveying the Web sites of the Louisiana Delegation, I found these comments relating to the energy industry:

“Instead of increasing energy production… [the President] plans on implementing a cap-and-trade system that will cost in the trillions of dollars, further impacting our businesses and families.” — Sen. David Vitter

“Raising taxes on American businesses will not make us more energy independent, and less domestic energy production means higher energy costs for Louisianians. I believe we should be looking at ways to lower energy costs in the short term while simultaneously working toward a future of more renewable energy production.” — Rep. Charles Melancon

“One immediate approach to dissolving America’s dependence on foreign oil is to allow greater access to federal lands containing natural gas resources and the removal of barriers to development on lands that we have already leased.” — Rep. Rodney Alexander

“America’s energy security depends on a balanced, comprehensive energy policy. We must increase production of America’s vast energy resources, improve conservation, and invest in the energy technologies of the future…” — Rep. Bill Cassidy

“I continue to fight hard against the Obama Administration’s plan to raise taxes on Gulf Coast energy producers. I have visited with Louisiana small business owners who work each day to supply America’s energy needs. Their message is loud and clear — the President’s tax hike on oil and gas producers will kill Louisiana jobs and drive energy production overseas.” — Rep. Charles Boustany

No matter what happens in the coming months, we need to remain diligent and look to the future. There is a place for alternative and renewable energy in our future alongside oil and natural gas. In the immediate future, natural gas will serve as the clean, alternative energy bridge between traditional fossil fuels and renewable and green fuels; and we hope the industry is given the opportunity to participate in the energy transition which won’t happen overnight, but over several decades.

In response to growing alternative energy initiatives and as an effort to maintain Acadiana’s place as a leader in energy production and services, the Acadiana Alternative Energy Committee was established in early 2009. Under the leadership of LEDA, experts and stakeholders from across south Louisiana are working together to explore regional opportunities in alternative energy and raise awareness about Acadiana’s unique assets in manufacturing, R&D and natural resources. The group is currently chaired by Dr. Mark Zappi, dean of the College of Engineering at UL Lafayette, and LEDA Executive Committee member Chad Hanks, president of the Lafayette Farm Bureau. The committee will present the first lecture in its Fall Lecture Series Thursday, Oct. 22. Dr. Mark Zappi will present An Introduction to Alternative Energy Technologies at 1:30 p.m. and at 6 p.m. at the LEDA Resource Center, 211 E. Devalcourt St.