A non-profit announces plans for a public charter school in north Lafayette. 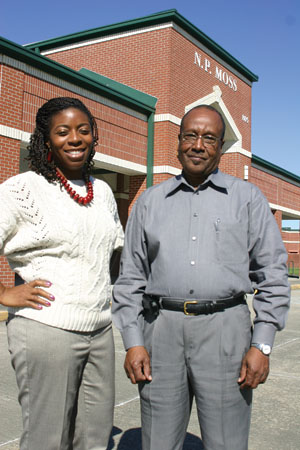 At 6:30 tonight in the Heymann Park Rec Center, dozens of parents are expected to turn out for an informational meeting on a planned public charter school for north Lafayette. What many will no doubt long to hear: A viable alternative to the status quo is coming. That alternative is Harvest Preparatory Academy, an ambitious project announced last week by Outreach Community Development Corporation, a non-profit formed by Northside residents and educators. “We just kind of got concerned about the test scores, the dropouts, the failures, and this was the whole concept: What can we do to help improve the situation,” says OCDC President Charles Lewis, who taught instrumental music in the public school system in Lafayette and Caddo parishes for more than 30 years and has a master’s degree.

“We want to give them what state Superintendent Paul Pastorek wants for all students in Louisiana, and that’s a world-class education,” says Tiffanie Lewis (no relation to Charles Lewis), OCDC’s executive director and a teacher, counselor and administrator in public schools in Texas and Louisiana for a dozen years, the last five at Northside High. “Students on the north side of town have been underserved — typically underserved — by the parish, and we hope to make a difference.”

The school will use project-based learning — a task- and problem-solving curriculum — and students will be equipped with individual laptop computers and iPods, as well as other high-tech electronics. “Every type of technology that you can basically name that is being used in schools now will also be used in our school, and even more, to help the learning process,” Tiffanie Lewis adds.

The school day will also be longer at Harvest Prep: 8:30 a.m. to 4:30 p.m., with an extended day program until 5:30 p.m. for additional instruction, homework and extra-curricular activities. And the school year at Harvest Prep will also be about two weeks longer than that of public schools in Lafayette Parish.

OCDC’s plan is for Harvest Prep to accept 90 students in grades 5, 6 and 7 and will increase one grade level per year until it reaches 600 students in grades 5 through 12. The group wants to draw students from four north Lafayette schools: J.W. Faulk and Alice Boucher elementaries, N.P. Moss Middle and Northside High, four of the parish’s lowest-performing schools. Because it would be a public charter school, Harvest Prep would be free — no private school tuition — funded by state tax dollars.

The plans for Harvest Prep are big, but so is the caveat hanging over the school: It has to obtain a charter first.

The group will submit a charter application to the Lafayette Parish School Board at the board’s Nov. 18 meeting — an application the board could choose to reject.

School Board President Carl Lacombe, who has not seen the OCDC charter application, says the board will give the application fair scrutiny. “We’ve looked at charter applications before, so this is nothing new,” Lacombe says. “I’m sure the board’s going to look at it very closely.”

But Lacombe readily admits he, like many in the public-school community not just in Louisiana but nationwide, has misgivings about the charter-school concept. “You also have to deal with the fact of what kind of resources are going to be siphoned off of the public system,” Lacombe explains. “We are a public school system and we have to make sure that we are stewards of the public’s money and using it properly to operate the schools.”

However, OCDC, according to Tiffanie Lewis, is prepared to lobby hard for Harvest Prep, all the way to the state Board of Elementary and Secondary Education if necessary: “We hope Lafayette Parish will take the opportunity to work with us. But if they don’t take the advantage and the opportunity to work with us we’re prepared to move on to BESE and file an application with them.”

Obtaining a charter is critical for Harvest Prep, says Tiffanie Lewis, in order to offer a free education to its students; unlike private and parochial schools, public charter schools are state funded and must meet state educational standards. “We don’t want to be a private school in any form or fashion,” she insists. “We want to reach the students who are high-poverty, at-risk students, and typically students of that nature can’t afford to go to private school.” She also argues that there’s more accountability for charters than for mainline public schools: “Charter schools are held way more accountable than a regular public school. If you don’t meet certain criteria within a certain amount of time your school can be closed. The other thing is choice: Students choose to come to this school. Teachers choose to work at this school. It is about choice, and creating a healthy competition between the local [public] school and the charter school.”

“Charter schools have proven to be good alternatives,” says Greg Davis, a longtime Lafayette education advocate and a member of the civic group 100 Black Men, which got details on the plan for Harvest Prep last week from Tiffanie Lewis. “They’re showing good results in New Orleans. I’m all for change and reform, especially the kind that is driven by past results that have proven to be effective. I think that Tiffanie Lewis made a good presentation and I think she has a good concept.”

Also part of OCDC’s plan is to use N.P. Moss Middle as the site for Harvest Prep. That facet of the proposal, however, is complicated: The firm currently conducting a comprehensive facilities master plan for the LPSB recently recommended that Moss become the site of a technical high school. “We felt like N.P. Moss was being under-utilized, and we feel it could be fully utilized in its capacity with this charter school,” says Tiffanie Lewis.

Charles Lewis says they hope to open Harvest Prep for the 2010-2011 school year, but they’re willing to be patient and get it right. “If it takes longer,” he says, “we’ll just do what we have to do.”