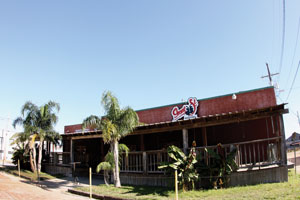 Everyone’s been wondering what happened to Grant Street. Its 2008 incarnation into a Saturday night hip-hop club with sporadic live shows has created many confused followers of the club’s almost 30 years of existence.

Through the years, Grant Street Dance Hall has been the home to high hopes, heartaches and fond memories. I remember seeing 311 on Halloween, watching Harry Hypolite’s band play “Coming Home” soon after Hypolite’s death, and hearing Buckwheat & Lil Buck playing for Uncle Donald in his last days. Everybody from Ray Charles to Stevie Ray Vaughn has played there, and we all have our own special memory of the place.

So when I got a call that Son Volt was looking to play Grant Street, I contacted Danny Smith about what was going on with the venue. “Drew, I’ll be honest with you, I rarely [break even] on live shows. It’s like I got people pulling against me.”

What I know of Danny is that he worked his way up from door guy on The Strip downtown to the owner of several businesses and is currently rebuilding the IceGators franchise. So this Son Volt show turned into, “If you want to book shows, let me know. I got a hockey team to run.”

It’s a challenge: booking great bands, letting people know who they are, getting the support of local media, and keeping ticket prices down in a bad economy. But through its near demise, parking issues, sheet-rock scandal, renovation, and resale, Grant Street is a reflection of where our culture and musical traditions are headed.

And now I’m looking at this challenge with optimism because bands like Son Volt love our culture and want to play here.

For those unfamiliar with Jay Farrar or Son Volt, here’s what you need to know: Jay is from Southern Illinois. Rural and somewhat isolated, the bottom half of the Land of Lincoln is surprisingly similar to south Louisiana. As a founding member of the ground-breaking alt-country band Uncle Tupelo, Farrar is not only a great songwriter, but well rooted in traditional music without being tied to its formalities. The cover he sang of the Carter family song “No Depression in Heaven” would later be the name of alt-country’s most prestigious music rag, No Depression. Uncle Tupelo split into Jeff Tweedy’s Wilco and Jay Farrar’s Son Volt. The band is a staple at music festivals worldwide and Lafayette native Andrew Duplantis plays bass and sings back up. The Son Volt song “Windfall” mentions our state in verse: “Catching an all-night station somewhere in Louisiana/It sounds like 1963, but for now it sounds like heaven/May the wind take your troubles away.”

I asked Jay about his time spent here and his musical career:

Jay Farrar: I feel a connection to Louisiana — I lived in New Orleans 1995-96 and have friends in Lafayette. Festivals Acadiens is one of the best music festivals in the country. The time I spent living in Louisiana left me with a deep appreciation of the culture and music. I still play an upright piano that I picked up in Ponchatoula. I brought back a lot from Louisiana literally and maybe spiritually as well, which is lot harder to define. I still think Iry LeJeune and Amédé Ardoin were some of the most passionate players ever — even if I can only understand a handful of French words.

Drew Landry: Tell me about the transition from Uncle Tupelo to Son Volt. Has being the poster boy for the alt-country movement been a blessing or a curse?

JF: The alt-country label is a dialectic that has no start or end point... Uncle Tupelo and Son Volt just being players in a relay of musical ideas in a sort of continuum.

DL: What are the similarities between Southern Illinois & South Louisiana?

JF: St. Louis and New Orleans historically shared commerce, and through that the exchange of musical ideas with the Mississippi River as the conduit. Both cities were under both Spanish and French flags. St. Louis, however, chooses to ignore its heritage. A historically minded guy in St. Louis suggested putting up the original French street names in St. Louis, but the city won’t allow it.

DL: Tell us about your latest project, One Fast Move Or I’m Gone.

JF: Jack Kerouac gave great rules to follow — and that is that there shouldn’t be any rules. Disregarding traditional form, structure and themes can open creative doors as well as allowing what does get created to be more individualistic in the process. One Fast Move Or I’m Gone with Ben Gibbard is a collection of songs using Jack Kerouac’s prose and themes from the novel Big Sur as lyrics.

DL: So, how has the industry changed and what advice do you have for other independent artists?

JF: The medium or mode for delivering recorded music has changed and will probably continue to change. If someone is starting out they should focus on live performance. That has been constant for hundreds of years and won’t be changing anytime soon. And you get to see the world — the way Jack Kerouac would do it.

Drew Landry is now booking bands for Grant Street. He’d love to hear from anyone who supports live music and still has an interest in national acts coming to Lafayette. The legendary venue will feature live music on Friday nights and whenever it’s possible to pull touring acts off the road. The new Web site is  www.grantstreetlive.com . Please see the upcoming calendar, leave any questions, comments or constructive criticism.