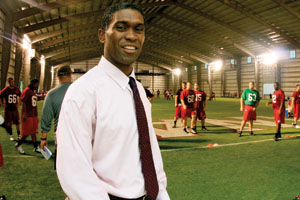 Curtis Hollinger, a Lafayette attorney and former all-American tennis player at UL Lafayette, is reaching into his own pocket in an effort to prove that increasing academic requirements for high school athletes is not only practical but do-able.

Hollinger mailed a letter to high school principals in Lafayette, which should be arriving today, offering $1,500 to the first public school that raises its minimum grade point average to play sports from 1.5 to 2.5. The current 1.5 GPA requirement established by the Louisiana High School Athletic Association has twice been challenged in the Legislature by Lafayette Rep. Rickey Hardy, who has sponsored legislation to raise the GPA to a more modest 2.0. Both efforts have been beaten back by the LHSAA.

“It’s just a continuing effort on my part to keep this issue on the forefront,” Hollinger says. “I’ve never had anyone tell me how they can justify our GPA standard for athletes as being consistent with the world class educational system [promoted by state Superintendent Paul Pastorek].” The LHSAA, in opposing efforts to raise the GPA for student athletes, has expressed concern that higher standards will lead to an increased drop-out rate when students whose main motivation for staying in school is sports fail to make the grade and can no longer participate in athletics. Hollinger and Hardy argue that higher standards will nudge student athletes toward higher achievement — a critical dynamic since only a fraction of them will go on to earn college scholarships, much less reach professional level. “I’d like to see athletes be helped to pursue a good education,” Hollinger says, “and I think that state policy can go a long way to help in that cause.”

Hollinger sponsored a forum in September at the Cajundome Convention Center at which Pastorek was present and expressed support for Hardy’s bid to raise requirements for high school athletes. Pastorek will be the guest speaker Tuesday, Dec. 1 when The Independent Weekly Lecture Series resumes in Lafayette.