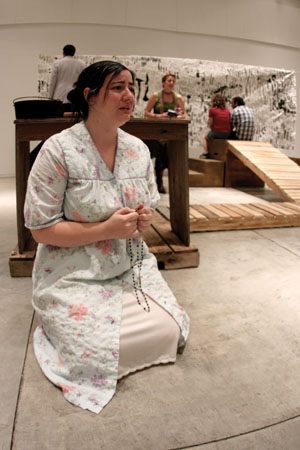 The audience reaction to PLAY.MUSIC.HEAL. is visceral — cringing one moment, laughing another, welling up with empathy the next. Nine characters stepping forward and back, ranting, raving, dreaming, demanding, divining from themselves and the audience the essence of humanity and the soul of south Louisiana. It is the latest production from Acting Up (in Acadiana), the resident theater company at the Acadiana Center for the Arts. It’s an ensemble-developed work in progress that has made stunning progress since the first workshop production of it in March at the AcA. Its next stop — this weekend at Peter’s Piano Place east of the French Quarter for the New Orleans Fringe Festival —  will bring it before a wider and no doubt more demanding audience.

“These characters were all created by the actors who are performing them, for the most part,” says company Director Amy Waguespack. “That’s been real different for us. It’s like each actor has their own baby, and they’re having to watch their babies grow and change and evolve as well. That’s been challenging for us.”

The genesis for PLAY.MUSIC.HEAL. goes back to a conversation among company members about the healing potential of music and a desire to create a dramatic work in the mold of “The Style,” a technique developed by Tim Robbins’ The Actors’ Gang. That led to 10 weeks of improvising dozens of characters and working with musicians including Henry Gray, Carol Fran, Bernard Pearce, Chris Courville and Chris Stafford, with Andy Cornett as musical director. Along the way, two members of The Actors’ Gang came to Lafayette from Los Angeles to serve as consultants.

The current version of PLAY.MUSIC.HEAL., which had to be trimmed to fit a one-hour time slot for the Fringe Festival, is lean and fast-paced. “It certainly reinforces my belief in what can happen when a group of people are all creating together and taking risks together with a new work — that some really magical things can happen with an ensemble and the audience, which is ultimately why we do it,” says Waguespack.

The development of PLAY.MUSIC.HEAL. doesn’t end with this weekend’s performances in New Orleans; Justin Zsebe from the Actors’ Gang is flying to the Crescent City to see the performance and will then come back to Lafayette to help the actors further define their characters. The parenting process continues.

“Lately I’ve been struggling a lot with how this character is growing, says Cheramie, whose character, Maw Maw Peggy Guidry, is based on her grandfather from Lafourche Parish. “I’m at a frustrating point because this character is someone that’s very close to me and therefore has made me very vulnerable, very defensive of this character.”

Acting Up (in Acadiana) will peform PLAY.MUSIC.HEAL. at 7 p.m. Friday, 9 p.m. Saturday and 3 p.m. Sunday at Peter’s Piano Place, 3811 Chartres St., in New Orleans. The New Orleans Fringe Festival features 40 groups from around the country presenting more than 120 shows in venues across the city Nov. 11-15. Tickets to performances are $7, and are available at the door or through www.nofringe.org. For details on Acting Up (in Acadiana), log on to www.actingupinacadiana.com .