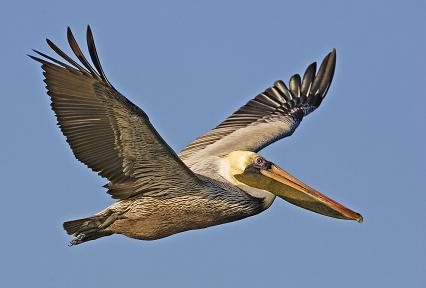 The brown pelican is being taken off the endangered species list. The L.A. Times reports that U.S. Interior Department officials made the announcement yesterday from New Orleans, noting there are now more than 650,000 brown pelicans along the Gulf and Pacific coasts.

The iconic state bird of Louisiana has been listed as endangered since 1970. Once hunted for their feathers, the bird faced an even graver threat from the widespread use of the chemical DDT, which damaged pelican eggs, as well as coastal habitat loss. The U.S. banned general use of DDT in 1972.

"In many ways, the brown pelican stands as a symbol of our nation's struggle to protect and conserve our wildlife," said Tom Strickland, assistant Interior secretary for fish, wildlife and parks, adding that "it's been a long, long steady climb back ... from the brink of extinction."