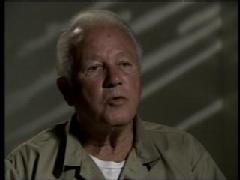 Former Louisiana Gov. Edwin Edwards, 82, is heading into the home stretch in his 10-year prison term on racketeering charges. Imprisoned in 2002, he is due to be released from the Oakdale Correctional Facility in a year, then spend six months in a halfway house before he is given back his freedom.

WDSU-TV in New Orleans reports, in October, Edwards was granted a three-day furlough, par for the course for prisoners reaching the end of their term of incarceration. Edwards spent his furlough in Baton Rouge.

While in prison, Edwards has worked with biographer Leo Honeycutt on a much anticipated book, due to be released on Dec. 1. In an interview last month with Fox 8 TV, Honeycutt told reporters Edwards is looking forward to feeling the “freedom of the open air and the open road. The first thing he would like to do when he gets out is that he would like to take an RV and go out West.” Perhaps working for a charity in the state is in Edward’s future, but what is not on the table is running for political office, even if he could. Honeycutt told reporters, “Even if he were to get a gold seal pardon, he is not ever running again so people can forget that.”

Photo of Edwards courtesy of WDSU-TV