Without a doubt state Superintendent of Education Paul Pastorek has been among the state’s most controversial figures this year. Appointed to the post in 2007, he is an aggressive and tough advocate for widespread change in the state’s public school system, which ranks among the poorest performers in the nation. 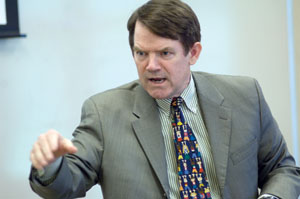 Pastorek’s 2009 reform agenda — which included an effort to eliminate micro-management at the school board level and other major reforms related to school boards — was widely embraced by good government groups, including the Louisiana Association for Business & Industry, the Council for a Better Louisiana, a consortium of state chambers of commerce and others — including this newspaper. Teacher groups across the country, however, were steadfast in their rejection of his plan, and the state school board association even called for his resignation. None of the proposals even made it out of committee in the most recent legislative session, but Pastorek has vowed to keep fighting.

Whether you support the Pastorek Plan or oppose it, get involved in the dialogue this Tuesday, Dec. 1, as the superintendent is the featured speaker for The Independent Weekly’s lecture series, sponsored by IberiaBank. Pastorek’s talk, which begins at 11:45 a.m. at the Cajundome Convention Center, concludes the 2009 Lecture Series.

“With school board elections on the horizon in 2010 and the spring legislative session looming large, discussion on Pastorek’s plan is timely, and we want to hear from everyone,” says Independent Weekly Co-Publisher Cherry Fisher May. “Gov. Jindal touts Louisiana as a state of change, and while we are all in agreement that the public education system needs to change, will it really be part of the planned transformation of our state?”

The lecture will open with an overview of the academic performance of Lafayette Parish schools and conclude with a Q&A. Tickets are $35 per person or $295 for a table of eight. For more info or for reservations, contact Kathy Lowry at 337-769-8602 or [email protected] Tickets are also available at www.theind.com/indEvents.