Sail across the Atlantic to be where you belong. 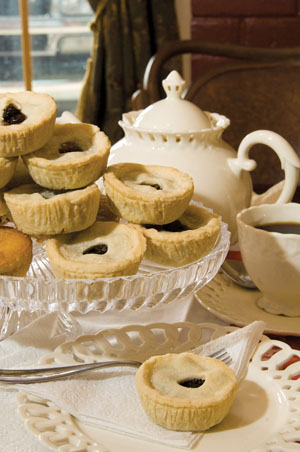 Mention mincemeat pies, and most folks wrinkle their noses in horror. “Meat and prunes,” I remember thinking as a child, a combination as frightening as liver and squash, which wound up on my dinner plate on terrible occasion. These days I love liver and squash (think grilled, still-pink calves’ liver with onions, and roasted butternut squash spiked with a bit of cumin, fennel seed and garlic). And I also have learned to love mince pies. But don’t even consider the mincemeat that comes out of a can; I think that’s what gave me the willies back when. Think dried currents, raisins, orange and lemon peel, apples, brown sugar, butter and brandy, and you’ve got more to do with sugar plums than with meat pasties.

Mince pies are an ancient holiday tradition in England. In medieval times, the small pastries, called chewette, did indeed contain meat or liver, boiled eggs and ginger. Over time, chopped dried fruit was added to enrich the taste. By the 19th century, the meat had vanished, although beef suet was used for fat content.

Novici Haizel grew up between Accra, Ghana; New York; Geneva and London, where she learned to bake in the High Tea tradition. Mince pies are a holiday speciality, one that she has loved since she was a child. When she opened her tea room and cake shop in the Oil Center, mince pies came on the menu following Thanksgiving. Last year, she convinced me to taste one of the small tarts. I was a convert on the spot. She bakes them through December. It’s considered good form to eat a mince pie every day during the 12 days of Christmas, one for every happy month of the next year.