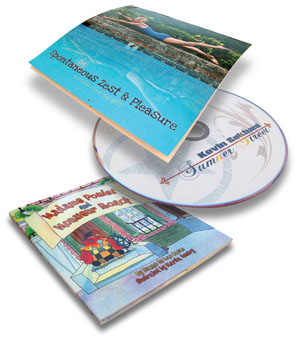 BOOK OF DAZE
Alyce Wise is a busy lady. Days, she teaches Pilates at Camellia House, helping countless locals re-jigger aching joints and get in shape. Nights, you can often see her dancing with interpretive flair round town, performing in plays, riding her bike and generally raising the quality of life in the Hub City by her joyous example. Her latest project is a fundraiser for the Gulf Restoration Network, a nonprofit focused on wetlands and barrier island restoration. She’s taken her goofy sense of humor and her Pilates chops over to New Orleans, where friend and photographer Alice “Dallas” McNamara shot Wise spoofing her own expertise. Wise, tongue in cheek, illustrates Pilates moves at appropriate locations such as Rock n Bowl (“rolling like a ball”) or Les Bon Temps Club (“open leg rocker”) or the New Orleans Aquarium (“mermaid”). Count the days of 2010, raise some money for our sinking coastline and give yourself a daily chuckle with Wise’s Spontaneous Zest and Pleasure Calendar. On sale for $15 at Kiki, 406-0904, Rok Haus, 981-8116, In Balance, 988-9909 and Jefferson Street Market, 233-2589. — Mary Tutwiler

GULF COAST COUNTRY
Some times nice guys don’t finish last. They finish near the top of the dog pile, with something to show for sweating it out in the boiler room of the Meat Blaster. Such is the case with Kevin Sekhani, former Lafayette homeboy and now Austin resident and songwriter. He’s making the rounds with his new band, The Bayou Rulers, promoting his record, Sumner Street, which is fast on the short list for consideration for nomination in the Best Americana Album Grammy category. Sumner Street traffics in heartfelt Louisiana/Texas-informed, four-on-the-floor alternative country-style Americana and pop rock that sticks to your brain, comes from the gut, and stirs the stewpot of mud, love, luck and honey. If you like your acoustic guitars mingled with fiddles and stacks of twang, you’ll dig this. Buy it at cdbaby.com/cd/kevinsekhani. — Dege Legg

NO CLUCK LUCK
In the days before Bengal, we settled our differences with roaches the old-fashioned way. Award-winning story teller Dianne de Las Casas recounts a classic Louisiana folk tale — an_d accounts for the sour relationship between chickens and roaches — in_ Madame Poulet and Monsieur Roach (Pelican Press). Set in an opulent home in the French Quarter, Madame and Monsieur are the best of friends, sharing responsibility for the house’s upkeep and maintaining a high level of domestic tranquility until, that is, Monsieur’s lazy exoskeleton begins to itch. Taking on the time-honored role of trickster to Madame’s dupe, Monsieur soon wears out his welcome and becomes a snack for the flustered fowl. Madame Poulet and Monsieur Roach includes funky watercolor illustrations by Marita Gentry and is available for $15.95 at all major book sellers. — Walter Pierce