Lafayette is one of the best places to live during this economic downturn, but don’t take my word for it. 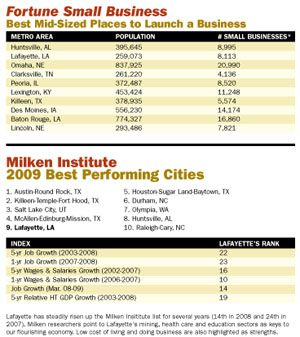 Lafayette regularly receives an A when it comes to quality of life and cultural endeavors, and it should come as no surprise that Lafayette also receives high marks when it comes to our economic prosperity. You and I can say Acadiana is one of the best places in the world, but it always means more when someone else says it. That’s why I always begin any presentation I give with a bit of good news from regional and national sources.

In the past year, Lafayette has received national recognition in the areas of job growth, wage growth, and business environment. Lafayette’s job and wage growth numbers have been on the rise for several years. Our cost of doing business, driven by affordable labor, health care and utility costs, has been holding steady, on the low end of the spectrum. Our entrepreneurial spirit, a fundamental component of our community and heritage, has gained the attention of people from across the nation. So, how does Lafayette compare to the rest of the nation?

Earlier this month, Lafayette received its most recent recognition from the Milken Institute. The Lafayette MSA is ranked as the ninth best performing large metro/city in the nation. That’s up five spots from last year (14th), which was up from 24th the previous year. The index measures five-year and one-year growth in jobs, wages and salaries, and technology output. It also includes 12-month job growth performance (March 2008 to March 2009) to capture relative recent momentum among the metros’ economies. Employment growth is weighted most heavily in the index because of its importance in determining community vitality, while wage and salary growth measures the quality of the jobs being created and sustained.

For several years, Lafayette has been high on Forbes magazine’s list of Best Places for Business and Careers. In 2009, the MSA had the 32nd lowest cost of doing business among the largest 200 U.S. metro areas, up five spots from 2007. The index is based on the cost of labor, energy, taxes and office space. Forbes also lists Lafayette as having the 19th best income growth and the 24th best job growth — both reflections of our thriving economy over the past few years.

Finally, when speaking about the overall business climate, Southern Business and Development recognized Lafayette twice in its April 2009 issue. For the third year in a row, Lafayette was recognized in SB&D’s Top 10 lists (list topics vary year to year), this time as one of the 10 Best Smaller Markets for Foreign Investment. Lafayette also made its list of Hot Markets in a Cool Economy citing construction investments by area medical centers and FlightSafety International’s $120 million training facility now open in Upper Lafayette.

In times of economic uncertainty, people are looking for ways to bring in more income or to replace lost income. Many people look at opening a business as one way to do this. Lafayette’s entrepreneurial spirit is one of the key factors to the community’s success that I mention everywhere I go. It’s not much of a secret here, and thanks to Fortune and BusinessWeek the rest of the country now knows that Lafayette is the place to be when starting a small business.

In October, Fortune ranked Lafayette as the second best mid-sized market in the nation for small business start-ups based on factors like a growing economy, affordable workforce, stable housing market and low crime. Small business growth in Lafayette was almost twice the average of other midsized metros. Population growth, per capita income and per capita income growth, and GDP growth were all higher in Lafayette than the mid-sized metro averages.

Entrepreneurs have created a progressive business community in Lafayette. In fact, BusinessWeek named Lafayette as one of the 50 best cities in the nation for start-ups and entrepreneurs in its March issue. Cities were selected based on small businesses and start-ups per capita, workers in “creative” professions, number of white collar workers and patents issued, among other measures. Though not mentioned in the article, Lafayette’s number of small businesses per 1,000 residents (63) was 13th highest of the 50 cities, and the number of start-ups per 1,000 (3.24) was 21st best.

Finally, Lafayette’s employment prospects have brought us to the top of several lists in 2009. Looking ahead to the end of the year, Forbes and Manpower ranked Lafayette as the 8th best city in the U.S. for job growth in the fourth quarter of 2009 with a net employment outlook of 9 percent. In the Lafayette MSA, from October to December, 16 percent of the companies interviewed plan to hire more employees.

In April, both Money and Forbes had Lafayette near the top of their lists of best places to find a job. Money listed Lafayette as one of the top six metro areas in which to find a job, with a population of 200,000-plus, based on unemployment rates and proportion of professional jobs. Strong employment in natural resources, construction, health care and education helped Lafayette reach the number three spot on the Forbes list of best places for jobs. Baton Rouge and Shreveport/Bossier were also featured in the top 10.

Nearly all of these lists saw big shifts related to ongoing economic conditions in the country. Cities that were once on top have slipped for one reason or another, but Lafayette is one of several communities that have managed to not only remain on these lists but actually improve their position. With recent successes such as ATC Associates’ headquarters move to Lafayette and Pixel Magic opening an office in LITE, Lafayette seems well poised to continue moving up the charts.