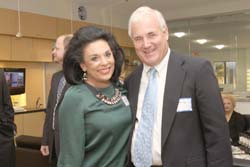 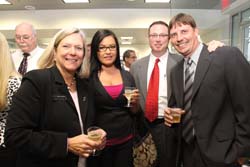 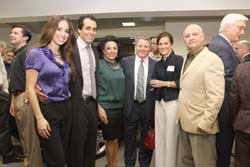 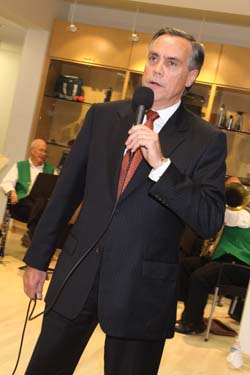 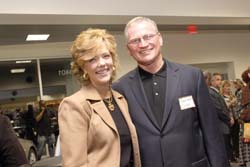 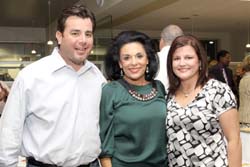 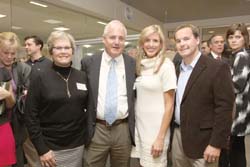 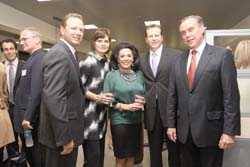 Marcelle and Popie Billeaud, and Keisha and Stuart Billeaud 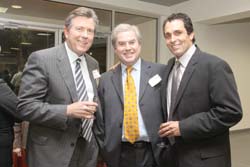 It was a fitting honor for Moss BMW, as several corporate big shots made a surprise appearance to celebrate the official unveiling of the new state-of-the-art BMW showroom and service center on Surrey Street — only the second such BMW facility to open in North America this year.

The celebration was held in conjunction with the Greater Lafayette Chamber of Commerce’s Business After Hours to showcase the $5.3 million investment in Acadiana’s economy. The German Oompah band’s deep brass sounds served as background music, with German dancers from the Roberts Cover area entertaining the guests, who also enjoyed several tables of food catered by a la carte. “We had a German table, an Italian table and, of course, a Lebanese table,” says Sharon Moss, dealer-president for Moss Motors, which also sells Mercedes and Honda.

Among the BMW reps in attendance was Gene Donnelly, vice president of the southern region, based in Atlanta. Donnelly is responsible for sales of BMW and MINI vehicles in 11 states and Puerto Rico. Randy Watson, who heads the southern region for BMW Financial Services, which finances all of Moss’ purchases, also brought his wife Lynn to the event and spent the day enjoying Lafayette’s hospitality. Randy called Moss the day before the celebration to say his wife wanted to see the new facility and spend some time in Lafayette. “We took them to Café V for lunch and shopping at Jefferson StreetMarket,” Moss says.

The new facility was designed by the Lafayette architectural firm Pécot & Company and built by J.B. Mouton Inc. The cascading water fountain that spans the entire front window and sleek styling of the slanted roofline are the first signs this is no ordinary showroom. Drive up in your BMW for service and glass doors automatically slide into the wall to create an entrance into the climate-controlled service center with 17 stalls, triple the previous capacity, which means your car gets into the service center faster with a much shorter shop stay. Controlled heating and cooling is good not only for customers and staff but also for the sensitive computer technology Moss uses for these high performance vehicles.
Pleased with the final product and response from customers and her employees, Moss is already planning her next construction project. “When I do build Mercedes, and I’ll be doing that in another couple of years, it’ll all be climate controlled as well,” she says.