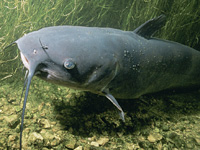 From Louisiana’s bayous to the Mississippi Delta region, the latest boatload of seafood producers to sing the blues are catfish farmers. Like shrimpers before them, the song goes: high fuel and feed costs, low sales prices and an ocean of southeast Asian imports. The Daily World reports that Louisiana catfish ponds have declined by approximately 6,000 acres in the past 10 years, a decline of 45 million pounds of catfish, from 65.7 million pounds in 1999 to 19.9 million pounds in 2008.

There are several efforts simmering to come to the aid of catfish farmers and fishermen, who struggle to sell their wild-caught fish. Like other seafood, the Louisiana legislature is looking at labeling laws requiring markets and restaurants to label Louisiana catfish. The state’s Seafood Safety Task Force is looking into the health risks of imported shrimp, crawfish and catfish. And catfish farmers are petitioning Congress to make changes to the way imports are regulated and inspected. Currently, the inspection of imported seafood is under the jurisdiction of the Federal Food and Drug Administration. All meat imports are regulated by the U.S. Department of Agriculture. Vietnamese fish are not classified as catfish currently; should the designations change, the USDA can hold imports to the same standards as U.S.-raised fish, leveling the playing field, southern catfish farmers claim. And that will support prices.

For now, both pond farmers and wild catfishermen are bemoaning not only a loss of income, but an end to a way of life that is part of Louisiana’s cultural heritage. “I hope I never have to stop,” Henderson Mayor Sherbin Collette, who has been fishing commercially in the Atchafalaya Basin for most of his life, told the Daily World. “This is my first love.”