A team of linguists publishes a long-awaited, all-encompassing dictionary of Cajun and Creole French 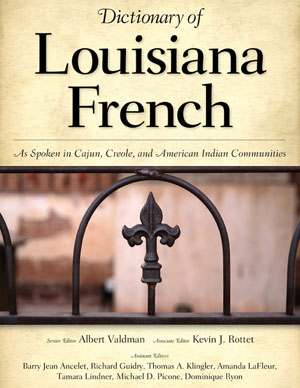 Father Daigle, a 90-year-old Catholic priest, created the first dictionary of Cajun French, published in 1984. “It’s an incredible piece of work,” says LSU Cajun French professor Amanda LaFleur, “but it is a work by someone not specifically trained in lexicography and is very much a work of his French. The French he grew up with in Lafayette and of course Welsh.” LaFleur, along with folklorist Barry Ancelet, and French teacher and cultural activist Richard Guidry had in mind a more encompassing dictionary, one that represented the girth of the Cajun universe, from the French spoken from Lake Charles to Chauvin, from Marksville to Iberville Parish. “They are different worlds,” says LaFleur. The Cajun team joined forces with a scholar of the Creole language, linguist Albert Valdman, retired from Indiana University.

Valdman, like Alan Lomax before him, spent decades recording Creole voices. He analyzed his field recordings while the Cajun team dug through anything published from the 1930s and 40s as well as Daigle’s dictionary, creating a data base of language that had been the lingua franca of the Cajun world before World War II.

Then came more field work. “That involved finding people who were fluent, and sitting down and chatting with them,” says LaFleur. “We took note of words and usages that were unique, special knowledge of activities like fishing or sewing or childbirth. We were looking for contextual examples.” Some came from years’ worth of field recordings made by Ancelet. Some from work done by their students. Some arrived as messages on LaFleur’s answering machine, or on small scraps of paper. “People kept sending words, sending words,” she says. 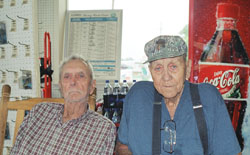 “Slim” and Alonzo Lemoine (both now deceased) of Marksville contributed to the dictionary.

Finally, 10 years into the project, they sat down at the kitchen table and began going through everything they had. “We had a lot of tough decisions to make about how to spell some words; there are so many spelling and pronunciation variations,” she says.

Metaphorical language, idioms and cliches abound. “I feel very strongly about metaphors,” says LaFleur. “They’re so pithy; they’re the shorthand of the language, and when we use them, the old folks smile.” The Dictionary of Louisiana French is as expansive and exhaustive a dictionary of Cajun French as you’re going to get, says LaFleur. “It is not a historical dictionary, it does not give word origins nor is it a differential dictionary of only Cajun terms. It includes everything in Cajun French that the French also use.” Certainly, the dictionary was created to help preserve Cajun French. But it has a practical application as well. There is a whole new generation of French speakers in Louisiana, and the language is changing. “Where it’s changing the most,” says LaFleur, “is down in Terrebonne-Lafourche, where many young people speak French. I’m also noticing a change in syntax. My students [who do field work as part of their classes] are going after younger speakers.” The older, primary language French speakers have a grammatical purity, what LaFleur describes as frozen in time. “People speak French in specific situations, men go hunting, women cook or play bouree.” But with the Louisiana classes in  French immersion, and the growing groups of students who attend language classes at the University of St. Anne, a lot of kids are getting an infusion of standard French.

“I raised my children in French,” says LaFleur. “I’m often asked, ‘What kind of French does your son speak, Cajun or standard?’ My answer is ‘I’m not sure.’ They speak a mixture of Cajun and standard French. They’ll use different words with a stranger than with their grandmother. Truthfully, I’m just glad they speak French.”

There will be a book signing at Barnes & Noble on Dec. 5, from noon to 2 p.m. The Dictionary of Louisiana French As Spoken in Cajun, Creole and American Indian Communities, $39, can be found at Barnes & Noble, on Amazon.com , or ordered directly from the University Press of Mississippi at www.upress.state.ms.us .