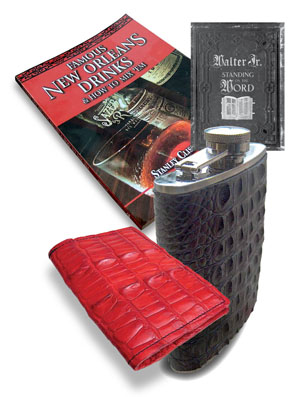 SHAKEN, AND STIRRED
The cocktail is enjoying something of a renaissance in America’s bars and saloons. This uniquely American invention has its origins in the French Quarter pharmacy of Antoine Amedée Peychaud in the late 18th century, according to Stanley Clisby Arthur’s 1937 classic, Famous New Orleans Drinks & How to Mix ’Em, an engaging, engrossing guide that has been reissued by Pelican Publishing Company ($8.95 paperback; available at major book sellers). There are, of course, recipes for the more famous cocktails to emerge from the Crescent City’s fabled saloons — the Sazerac and the Old-Fashioned chief among them. But there are also directions on how to mix a host of cocktails that have largely faded from memory — drinks like the Alexandre (gin, crème de cacao, rich cream and egg white), characterized by Arthur as “Smooth as cream, delicate as dew, and easily prepared ...” The Pelican edition even maintains the original’s quaint habit of numbering pages with words: “thirteen,” “thirty-five,” “sixty-seven,” etc., all the way up to ninety-six where Famous New Orleans Drinks ends with a guide to cocktail measurements. A jigger, by the way, is one and a half ounces — not to be confused with a pony, which is merely an ounce. — Walter Pierce

GATOR-MADE
Fly your fashion flag and support Louisiana’s cultural heritage at the same time. Cocodri (Cajun French for alligator) designs wallets, iPhone cases, business card cases and flasks out of Louisiana alligator. Ridged with the natural horn from the alligator’s back to give it an inviting tactile quality, the hides are saturated with color, from antique chocolate brown to bright turquoise and candy apple red. Pick one up, and it’s unlikely you’ll be able to put it back down — trust me. While the history of the alligator is a success story, brought back from the brink of extinction in the 1960s to a healthy population today, the alligator industry in Louisiana is in dire straits. This year, because of the global recession and a dearth of demand for luxury goods, farmers, trappers and tanners are struggling to continue to harvest and process alligator leather. Enter Cocodri, a Lafayette-based business (full disclosure: The Ind’s Mary Tutwiler is a partner) with a mission to help preserve Louisiana’s alligator industry and create one-of-a-kind, handcrafted products. Each item comes with a unique serial and alligator tag number — so you can feel good about a little self-indulgence while supporting a local heritage. Items start at $250, at kiki in River Ranch, 406-0904. — Leslie Turk

BIBLICAL BLUES
Bluesman Walter Jr. has been a weekly fixture for years at iMonelli, regaling patrons with his encyclopedic grasp of the blues, which he performs with facile aplomb. The Mermentau native now has five records under his belt and, somewhere along the way, found that old time religion. He lays it on thick in his most recent, Standing on the Word, a 15-song effort that doles out praise and shouts hallelujah. The record opens with Walter Jr.’s familiar swamp rock sound, “I Heard a Story,” and weaves its way through a jump-jiving “Wedding Wine” to the stripped-down, deeply Delta closer, “Dark as Death.” Standing on the Word showcases the depth of both Walter Jr.’s song writing and his newfound spirituality. The record is available locally at F. Camalo, Barnes & Noble, Asbury United Methodist Church and on-line at louisianamusicfactory.com . — WP