Rusty Cloutier will be signing copies of Big Bad Banks: How greed and ego among the big shots in banking and government created the crisis that wrecked our economy on Saturday, Dec. 12, from 10 a.m. to noon and again from 2-6 p.m. at Barnes & Noble in Lafayette. 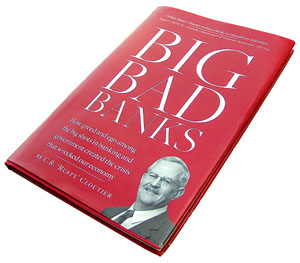 Cloutier is never at a loss for words, and at age 62, he’s finding a growing national audience willing to listen to his thoughts on the disaster he saw shaping up for many years -- and what steps need to be taken to avoid the same problems in the future. Earlier this month, he was on CNBC’s “Squawk Box.” Earlier this year, he testified on Capitol Hill and was profiled in The New York Times Magazine. As a lifelong community banker, director of the Atlanta Federal Reserve’s New Orleans branch for six years and former chairman of the Independent Community Bankers of America, Cloutier had a unique vantage point of last year’s economic crisis, which he shares in his recently self-published book, Big Bad Banks: How greed and ego among the big shots in banking and government created the crisis that wrecked our economy.