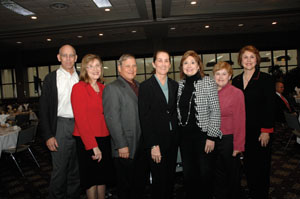 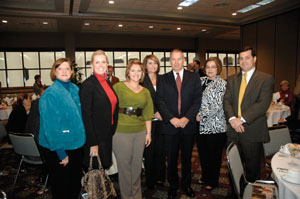 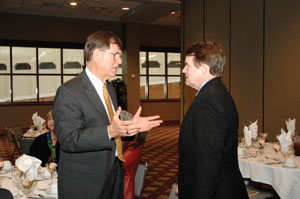 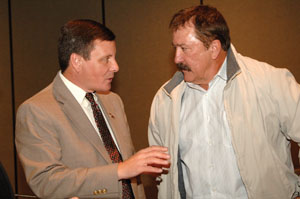 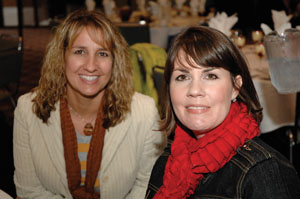 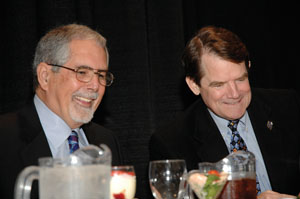 Steve May and Paul Pastorek 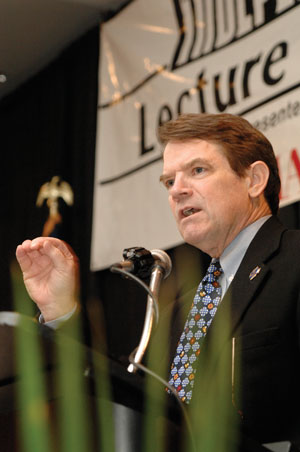 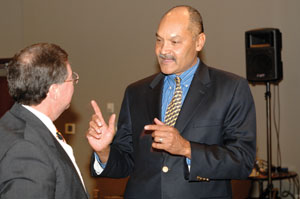 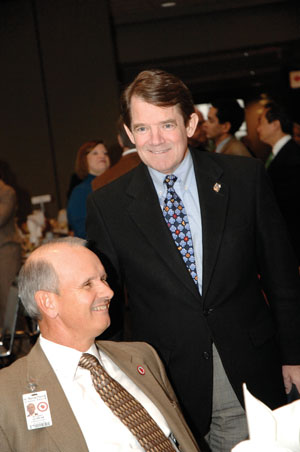 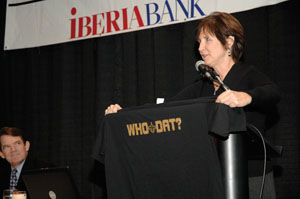 Cherry Fisher May with “Who Dat?” T-shirt

Independent Weekly Co-Publisher Cherry Fisher May welcomed the Dec. 1 lunch crowd on a light note, holding up a “Who Dat?” T-shirt to recognize the undefeated New Orleans Saints (who the night before had whipped the New England Patriots 38-17), but Superintendent of Education Paul Pastorek got down to business at the Cajundome Convention Center, delivering the final installment of the paper’s 2009 Lecture Series. The series is sponsored by IberiaBank.

Pastorek opened with praise for the academic efforts of many schools throughout the state in 2009: “I’m proud to say this past year education in Louisiana did an amazing job of improving academic achievement [scores]. They moved the needle on academic achievement by one of the largest amounts in the 10 years we’ve been measuring [it].” In 2009 Louisiana’s state performance score for public schools gained 4.7 points over 2008 for an overall score of 91. The highest a school can achieve is 200.

“We have quality going on here,” Pastorek told the crowd of about 120, pointing specifically to Iberia Parish, where teacher Stephanie Judice was recently named a recipient of the prestigious Milken Educator Award. In addition to earning the national distinction, Judice received a $25,000 cash award during a school assembly at New Iberia Senior High School. But Pastorek made it clear the state still faces serious challenges, this time citing schools like Lafayette’s N.P. Moss Middle, which continues to earn an academically unacceptable level (the minimum passing figure as of 2005 is 60). Louisiana is plagued with an unacceptable number of children who are below grade level in its schools, he said, even though high poverty students and African-Americans are showing more improvement than white students, closing the gap in scores between them. He expressed frustration with people who think schools with a high concentration of poor students can’t achieve academic excellence and says such a mentality can hamper efforts: “If we believe that, I promise you that will happen.”

Solving the problems comes down to accountability, Pastorek added, noting that no one appears ready to discuss that vital issue. “What is the goal?” “How do we get to the goal? “What happens if we don’t get to the goal?” The controversial superintendent posed the series of rhetorical questions to an audience of local school board members, administrators, teachers and business leaders. He said it’s time to start holding someone accountable for lack of progress, maintaining that everything should be tied to academic achievement, including pay, promotions, hiring and firing.

Pastorek also spoke briefly of his 2009 reform agenda, which included an overhaul at the school board level, including removing school board members from hiring and firing decisions, strengthening the qualifications needed to become a board member and paying them less for their service. The reforms fell flat, not even making their way out of committees during the most recent legislative session, and so incensed some in the system that the state school board association called for his resignation.

Pastorek said principals should be able to run their schools without interference and cited the charter school system in New Orleans as a successful example. “The solutions are all over the place, but we have to do things differently,” he said, suggesting everyone look at what others in the state (namely the New Orleans charter schools) and the rest of the country are doing.

Pastorek concluded his talk by encouraging communities to get involved in the process, noting that within the next 30 days the state Department of Education will post succinct data on its Web site to show how each district is doing, “with a guide for Joe Sixpack to go to a school board meeting and ask questions.