Kackie Lerille ices a historic restoration of a local landmark. 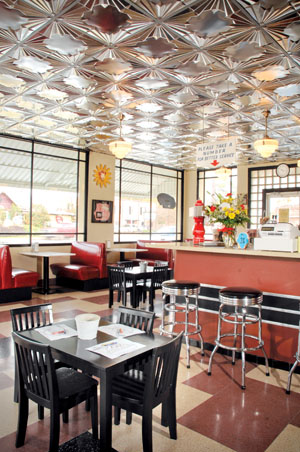 Last week, chief scooper Miss Ella May Meaux celebrated her 79th birthday in the same spot she’s been sung to for the last 48 years, Borden’s Ice Cream. The song might have been the same old saw, but the digs are definitely different, if spit shined and polished can be construed as change. Since Kackie Lerille set her cap at owning the venerable ice cream shop and Deco icon, locals began by holding their breath and ultimately cheering on the renovation.

Lerille and her dad, fitness guru Red Lerille, along with their long time architect Don Breaux, teamed up to restore Borden’s to its 1940s glory. Without changing the exterior except to paint it the color of vanilla ice-cream, its original hue, and adding an inconspicuous drive-thru in the rear, they managed to gain miles of interior space, about 40 new seats including soda-bar stools at the counter and lots of kiddie tables down the center aisle. Not exactly what Kackie anticipated when she bought the ice cream shop back in the fall.

“It snowballed,” she says of the ice cream shop. “We knew we were going to take care of it, but we didn’t know it was going to be this beautiful.”

Ice creamers will be dazzled when they walk in, literally, by the geometric sparkle of the shiny tin ceiling. That’s Kackie’s touch, the high Deco design that wasn’t a part of a building newly constructed as the U.S. was ramping up to go to war in 1941. The old-fangled lights are new too, chosen by Red. But the ice cream is still the same Borden flavors we all grew up on, although Kackie has added a yummy eggnog shake for the season as well as some grown-up treats like lattes, cappuccinos and espressos.

Former Lafayette Mayor Dud Lastrapes showed up in time to wish Miss Ella happy birthday. Looking around, he reminisced about one of his most memorable days at Borden’s. “It was during rush,” he says, “as freshmen we got some hazing.” How bad could it have been in 1946? “They made us dance on the tables,” says Lastrapes. Ah, the good old days, redux.