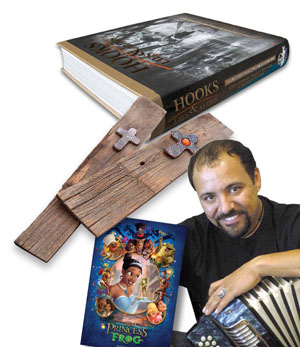 ON THE HOOK
Chef John Folse is back in bookstores with another heavyweight encyclopedic cookbook. Following up on last year’s tribute to wild game dishes, After the Hunt, Hooks, Lies & Alibis weighs in at 10 pounds and is Folse’s “authoritative collection of game fish & seafood cookery.” More than a recipe book (there are 600), this 920-page opus is chock full of beautiful photos and covers everything from the history of fishing to fish art, along with convenient guides to fish preparation, wine pairings and seafood markets and charter fishing across the state. Hooks, Lies & Alibis retails for $59.95 and is available at all major bookstores. Chef Folse will be at Barnes & Noble on Johnston Street to sign copies of the new release on Saturday, Dec. 19, from 3 p.m. to 5 p.m. — Nathan Stubbs

TERRANCE TERRIFIC
One of Acadiana’s most popular zydeco performers, Terrance Simien lends his considerable talents to the sound track of the new Disney animated feature The Princess & The Frog. The Grammy-winning leader of The Zydeco Experience plays accordion, rubboard and triangle on the track “Gonna Take You There,” a mostly zydeco, slightly Cajunized two-step amalgamated into a typically pleasing Disney production. Simien says sound track composer Randy Newman based the song on a couple of tunes from Simien’s first album. The movie is set in New Orleans and Newman, who was born in the Crescent City (although he spent most of his life on the West Coast), demonstrates a deft ear for the sounds of south Louisiana. Ten of the 17 songs are vocal numbers, and they run the gamut from gospel and blues to R’n’B and jazz, and of course zydeco. “Disney films are timeless classics,” Simien says, “and to have zydeco music in the film — mentioned in the film and also being played in the film — it’s just another thing that’s going to help our music, help kids to know about our music — the future tourists.” Simien recorded the track at a Los Angeles studio, and was in L.A. for the premiere late last month. “It’s an incredible movie,” he says, “and it shows Louisiana in a way it’s never been shown before, and in a positive way.” The Princess & The Frog original sound track is $18.99 and available now at major retailers. — Walter Pierce

CROSS FOR A CAUSE
When Nina Ward fell in love with her neighbor’s unique cross on a wooden plank, she had no idea what irony the hand-made piece would hold. Ward, who owns W. Home Furnishings in River Ranch, sought out the artist, a senior at the Academy of the Sacred Heart in Grand Coteau, and asked if she could sell the one-of-kind pieces in her store. The young student, Madison Tomkins, jumped at the opportunity, as she had been selling the wooden crosses to earn money for another mission to Nicaragua, where last summer she helped victims still trying to recover from 1998’s Hurricane Mitch. Recently, when the roof at Immaculate Conception Church in Washington was being replaced, the church’s original 1852 wood shingles — still in place underneath the existing metal — were being discarded for trash, so Madison and her mother salvaged some of the materials. The aspiring artist, who lives across the street from the church, went to work hand making crosses and attaching them to the wood shingles. When Ward realized Madison was devoting so much of her time and talent to help others she was especially moved; the store owner opened her business in Lafayette after falling victim to Hurricane Katrina. “To think that somehow we were helping other hurricane victims gave me chills,” Ward says. “We lost our home in Mandeville; it was a real tragedy in our lives, but it brought us to Lafayette, and we couldn’t be happier and feel very fortunate.” Madison’s exceptional crosses, which can be displayed alone or in groups, sell for $29 each. Call W. Home Furnishings, 1910 Kaliste Saloom Road, at 993-8883. — Leslie Turk