The oil industry thrived in 2008, but last year optimism was traded in for tumbling prices, 50 percent plus reduction in rig activity and an overall malaise about the industry’s future.

This past year was a challenge for many Americans. Credit issues, home foreclosures and swine flu were just a few of the issues that captivated the nation over the year. The oil and gas industry had its own series of challenges in 2009. If you look back to 2008, you would see an industry thriving with activity, record high oil and gas prices, and a great outlook for the future. As 2009 progressed, all of that positivity and optimism was traded in for tumbling prices, 50 percent plus reduction in rig activity and a feeling of a bleak future.

In 2009, the first African-American president of the U.S. was inaugurated into the Oval Office. But much more important than the historic presidential race was the far left, liberal agenda the president decided to so aggressively pursue. Much of what happened in 2009 originated from the president’s approach to the major issues that affect us all: economy, energy, environment and health.

Let’s take a look at a few of the most important issues of 2009.

FY2010 U.S. Budget — It did not take long for President Obama to declare war on the oil and gas industry. Though all of the president’s closest aides denied the allegations, it was clear when the president released his FY2010 budget he wanted to bring the industry to a halt. The repeal of a series of incentives that have been considered the “Holy Grail” of the industry were included in the president’s budget. These incentives are necessary for companies to acquire the investment capital needed to explore for oil and natural gas. The following is a sampling of some of the more important incentives the president intended on repealing: 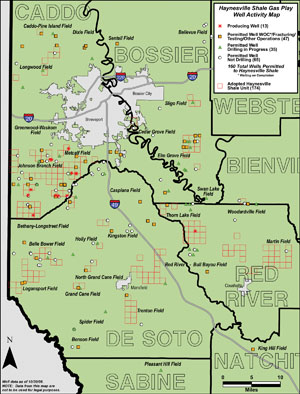 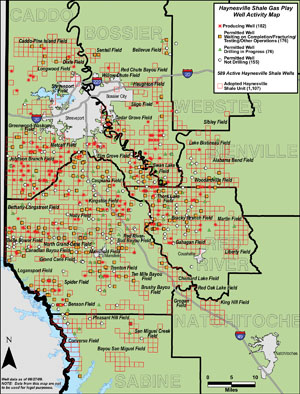 At one point (in 2009), the Haynesville Shale accounted for more than 50 percent of the drilling activity in Louisiana.

He also proposed increasing geological and geophysical amortization costs, levying an excise tax on Gulf of Mexico production, and implementing a $4/acre fee on Gulf leases designated as non-producing.
As soon as the president released his budget, the industry came together and responded as a united front opposing the budget. A petition garnered more than 35,000 signatures in one week. Ultimately, the voices of the industry were heard, and the president was prevented from repealing these incentives in the budget reconciliation process. However, this has not kept the president from continuing to push his agenda. From time to time, he comes back to these ideas, but the industry has been successful in its efforts to keep its incentives in place for now.

Cap and Trade — The Waxman/Markey legislation, which aimed to create a complicated emission-trading scheme, was at the top of discussion lists for most of the year. The bill proposed the creation of a carbon market and emission credits to be bought and sold by carbon emitters. The legislation was intended to lower the threshold for acceptable emissions over time until the ultimate goal of zero-carbon emissions was reached, thereby saving the world from carbon. Cap and trade came under rapid attack from every industry in the country. Democrats in D.C. quickly had to maneuver or risk the bill dying in committee. In order to save the bill, concessions were handed out to just about everyone — farmers, coal companies, refiners, chemical companies — leaving a much watered down version of the bill that was able to make it out of the House of Representatives. But, the Senate has yet to vote on it, and it does not appear that a vote will happen any time in the near future.

Giant Discovery in Gulf of Mexico — With the Gulf of Mexico drilling activity at a record low, the industry welcomed news this week from London based BP of its massive discovery in the deepwater Gulf of Mexico. BP calls the Tiber Prospect a “giant oil discovery” with potential production of 300,000 to 400,000 barrels of oil per day and reserves of 4 to 6 billion barrels of oil equivalent, which includes natural gas. To put that in perspective, the current U.S. daily crude oil production is 5 million barrels per day. Being less optimistic, the Tiber Prospect could potentially provide 5 percent of the U.S. daily oil production, presuming U.S. production will be at 5 million barrels per day by 2020.

Hydraulic Fracturing – Hydraulic fracturing has existed for 50 plus years. The National Petroleum Council estimates that 60 to 80 percent of all wells drilled in the U.S. in the next 10 years will require hydraulic fracturing. I have heard estimates as high as 95 percent of all shale gas wells will be drilled using this technology. It is clear to everyone that this technology is vital to the development of U.S. oil and gas resources. In 2009, Congress once again brought HF under attack. HF is protected from regulation as a hazardous waste in the Safe Drinking Water Act. The EPA and the Groundwater Protection Council have conducted study after study and have no documented case of contamination in over 1 million wells drilled. If the protection is repealed, it is estimated that an additional cost of at least $100,000 will be incurred with each well. After some initial traction, Congress has not moved forward with this issue, but it is expected to arise again in 2010.

Credit Crisis’ Impact on Domestic and Louisiana Drilling – Throughout 2009, it was impossible to turn on the TV or the radio and not hear something about the economy or the credit crisis. One of the first actions the president took was to help alleviate the financial struggles that our banks and businesses were facing. Most of the conversations centered on homeowners being forced into foreclosure and what steps could be taken to keep people in their homes. What was not talked about nearly enough was the effect that it was having on the business community and, in particular, on the oil and gas industry. The industry relies heavily on financing from banks and institutions. Only the major companies have the capital on hand to just go drill a well. Most companies take a project to the bank, get a loan, and then go out and drill a well. In 2009, companies saw millions of dollars taken out of investment programs. In one case, a company had a $100 million line of credit completely pulled simply because the bank did not have the cash to lend. The effect was realized most this summer when the U.S. rig count fell 60 percent from the previous year. Louisiana had the worst rig count on record in South Louisiana land, inland barge and in the Gulf of Mexico. As prices have slightly climbed and the economy seems to be stabilizing a bit, rig counts in Louisiana and the rest of the U.S. have started to rise and are giving a little hope for 2010. 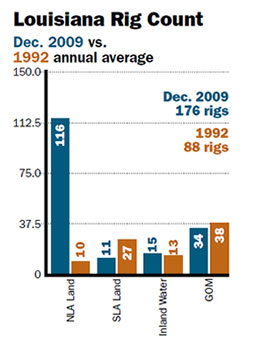 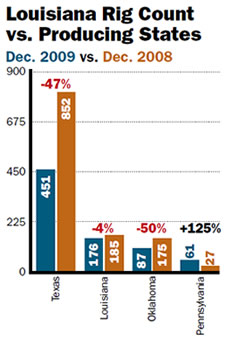 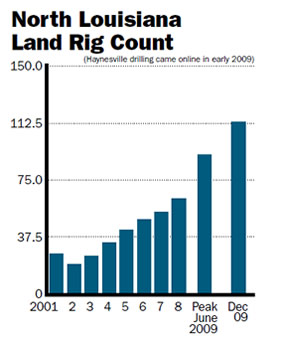 Green Economy – One of the most important items on the president’s agenda is his push for a green economy. His effort is really a two-prong approach. The first prong is to attack industry. The second prong is to create and promote green jobs/industries. The green jobs are primarily focused on the energy arena in hopes of the U.S. developing into the green manufacturing engine of the world. The president is concentrating on the development and improvements of solar and wind technology. Interior Secretary Ken Salazar has traveled across the U.S. touting the benefits of wind and the immense opportunities for it around the country. Yet, even if we double the current wind and solar energy production, it will not meet even one percent of the U.S. energy needs.

Global Warming – Global warming, climate change, and toxic carbon dioxide are one in the same. I believe these scare tactics are used and have been used for years by the liberal left to impose their policies on the citizens of the U.S. With a liberal president and Congress, the global warming rhetoric in 2009 was at an all-time high. Environmentalists and politicians used the threat of global warming to push everything from cap and trade to health care. As the year wore on, global warming transformed into climate change as scientific information publicized that maybe the Earth’s temperature was not increasing. Climate change most recently became toxic carbon dioxide after a series of e-mails were exposed documenting scientists’ efforts to hide and adjust data that brought into question industry’s responsibility for global warming. The year 2009 was an eye opener for the public, and we can only hope that an awakened public will continue in 2010.

CNG — As a side story of the economic crisis, the U.S. has been sending billions of dollars to other countries for oil. Almost 40 percent of America’s energy needs depend on oil, and more than 70 percent of the oil consumed is imported. The biggest consumer of oil is our transportation network with 70 percent of the oil used each day to move people from one place to another. Transporting citizens is not suddenly going to stop. In order to reduce our dependence on other countries for fuel, we must find a suitable substitute for oil. In 2009, we confirmed that we have a solution — natural gas. Natural gas has always been a viable alternative to gasoline and oil. The challenge was that we simply did not have an adequate supply and would likely find ourselves in the same position as we are in now. The explosion of shale plays in 2009 has been a game changer as far as fuel is concerned. We now have an estimated 150-year supply of natural gas with current discoveries. CNG and natural gas are a 100 percent viable alternatives to gasoline. We have a solution to our dependence on foreign sources of oil, and it is right below our feet.

So where does this leave us for 2010? Concerned but hopeful. Though it was a tough year, a few significant small victories were achieved that we can carry into the new year. Congress failed to pass the Waxman/Markey legislation. I am sure it will resurface in 2010, but the momentum needed by the Democrats in Washington to pass such legislation has likely passed. With 2010 bringing an election year to Washington, there is reason to hope that more favorable individuals will replace some of the anti-industry congressmen and congresswomen. Also, 2009 brought some stabilization in pricing for a good part of the year. At least it was more stable than it has been in the past, which is good for everyone. As the new year approaches, let’s be hopeful for what the year will bring, but let’s do so while looking over our shoulder.

Gifford Briggs is the Louisiana Oil and Gas Association’s vice president. He has been with the association for two years and focuses his efforts on building relationships with the Louisiana Legislature and the executive branch of state government.