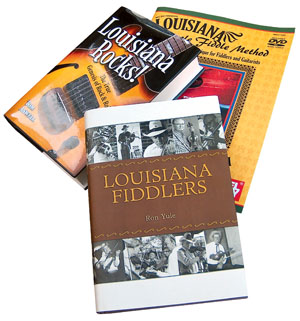 We begin a music-themed holiday edition of Finds with everything you need to know about Louisiana’s invaluable contribution to the birth of rock ’n’ roll: Tom Aswell’s Louisiana Rocks! (Pelican Publishing Company), an encyclopedic review of the musicians and venues that mid-wifed a screaming baby into America’s consciousness. Aswell, himself a former disc jockey and newspaper journalist, traces rock’s ascendency from the late 1940s — he makes a good case that Roy Brown’s “Good Rockin’ Tonight” (1947) and Fats Domino’s “The Fat Man” (1949) are the true first titles of the genre — through the Louisiana Hayride, which spawned Elvis Presley, to swamp pop and beyond. In many cases the Louisiana connection to these characters is tenuous — songwriter Kris Kristofferson served a short stint as a PHI helicopter pilot based out of Morgan City in the 1960s; Stephen Stills lived in New Orleans for about a year in the early ’60s before moving on to Greenwich Village and folk-rock fame — but the stories are engaging and provide a melodic backdrop to the state’s rich musical history. Louisiana Rocks! retails for $29.95 and is available at major book retailers. — Walter Pierce

FIDDLIN’ AROUND
D’Jalma Garnier isn’t kidding about being mindful about practicing every day. Garnier, one of the leading modern Creole musicians, has written a first-ever book and DVD combo teaching the techniques of Creole fiddling through the music of Louisiana Creole French music greats like Amédé Ardoin, Canray Fontenot, Bébé Carriere, Dennis McGee and Boozoo Chavis. There are tunes to practice and video of Garnier playing so fiddlers can watch the proper fingering and bowing of a great fiddler while learning to master the feel of a song. Louisiana Creole Fiddle Method is available from Louisiana Folk Roots, [email protected] or 234-8360, for $15 to their membership, or to registrants for the 2010 Dewey Balfa Cajun and Creole Heritage Week. Or order from Mel Bay at melbay.com, $19.99. — Mary Tutwiler

JUST PLAIN FOLK
What better Christmas gift than a book written by a guy name Yule? Ron Yule’s Louisiana Fiddlers (University of Mississippi Press) is a compendium of the famous and obscure fiddlers to perform in the state’s dance halls, concert halls, bars, dives and house parties from Albany to Zachary and all points in between. Fittingly, this alphabetic review begins with perhaps the most famous Cajun fiddler of all time, Dewey Balfa. A fiddler himself from Deridder, Yule weds an acolyte’s enthusiasm with scholarly detail and a knack for storytelling in this 337-page tome covering more than 60 fiddlers in virtually all American folk genres, from Balfa to Paul Woodard and from Cajun to country swing. And Louisiana Fiddlers is richly referenced, pointing the reader to a trove of other works both on the fiddle and on individual musicians. Louisiana Fiddlers is $40 and is available at all major book sellers. — WP