In south Louisiana, we are immune to worldly influences, national trends and common sense. 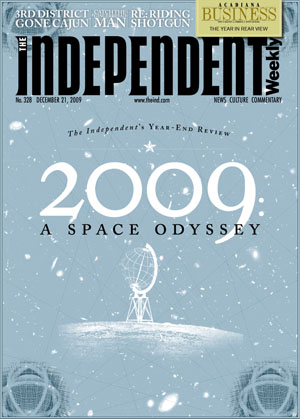 In south Louisiana, we are immune to worldly influences, national trends and common sense. But subconsciously, our bayou state and its inhabitants remain highly susceptible to the annual star alignments and celestial happenings that tug on all our sensibilities. In 2009, these atmospheric conditions and pressures were in full swing, resulting in seemingly unpredictable events where the unfathomable suddenly was fathomable. As of this writing, Edwin Edwards may fast be eclipsing Bobby Jindal in popularity, LUS and Cox are not embroiled in a lawsuit, the New Orleans Saints are playoff bound, and the Horse Farm, well it’s still the old overgrown vacant Horse Farm. Some things didn’t change in 2009. Regardless, interpreting these phenomena and figuring one’s place in this vast, ever-changing and expanding universe can be challenging for even the most celestially attuned. That’s why this year, The Independent Weekly has consulted its crackerjack in-house team of conspiracy theorists, hopelessly lost star-gazers, and amateur astrologers (the same people who put out the paper each week) to bring you the first ever year in review that triangulates where our newsmakers are in this vast cosmic soup. Something we’re calling: 2009 A Space Odyssey.

The outer limits, also known as the couillonsphere. The air is gaseous and quite thin. In 2009, only the highly dense, wildly lost and truly spaced out inhabited this nether region.

The twilight zone, a region of chaos, full of cosmic commotion. A high level of anti-gravity and a splitting atmosphere warp any and all outcomes in this highly disturbed area of space.

The ether. Those who in 2009 transcended into this realm know no bounds. They are expanding with the universe and have become both ineffable and inescapable.

A turbulent region wherein collisions among celestial bodies, many of them full of hot air, occur with frequency.

Inner orbit, Center of the universe

Harmony and order prevail. Lofty ideals and principles meet the realm of the possible in this stabilized zone of cognizance.

Lafayette’s local newspaper, The Daily Advertiser, had a long and illustrious history until it was swallowed up by newspaper behemoth Gannett, owner of USA Today. Gluttony doesn’t sit well with the leviathan of the newspaper industry: The corporation has been jettisoning editors, reporters and graphic designers in an attempt to buoy its sinking stock. The motto “All the news that’s fit to print” has transmogrified into “print anything that fits” in the shrinking news hole.

Sam Dore drifts with the solar wind into outer orbit. As far as we can tell, the newest member of the Lafayette City-Parish Council has yet to say a word since being sworn into office, leaving us to only guess at the reasoning behind his sometimes puzzling votes. One theory is he decides his votes by shaking a magic eight ball under the council dais (which would also explain why he is perpetually leaned way back in his chair).

One Wheel in the Ditch

Former school bus driver Kenny Joseph Mire made some pretty out-there decisions, starting with his hair style. Sporting a skullet couldn’t have helped his plea to keep his job after it was found he had driven his bus route just hours after bonding out of jail for an OWI. It was his third arrest for OWI. No charges yet for the skullet.

Howl at the heavens and it will bark right back. Big dog George Rodrigue, who wowed the art world from Topeka to Tokyo, has been looked upon as a mongrel in his own back yard. It took 30 years, but a blockbuster show at the AcA in Lafayette let this dog have his day, at last.

Secretariat galloped onto the track at Evangeline Downs, and all of Acadiana was star struck. The Disney feature film drew a casting call of thousands, including a red pony or two, and ultimately won a triple crown of a contract between Pixel Magic and LITE. Welcome to Hollywood, Cajun style.

In his quest to get higher (tish, we mean higher office of course), La. Gov. Bobby Jindal has been going lower, seeking the sphere of the god Pluto, who governs the realms of gold. In between his ubiquitous fundraising jaunts and social appearances at the White House, Gov. Piyush keeps his hands clean, while urging his angelic director of administration to get down and dirty, slashing the state’s budget.

State Treasurer John Kennedy is often depicted as Janus, from whom we get the name of the month of January. One face is looking back at his Democratic past; the other Republican profile faces forward to the new year and whatever it offers. Only time will tell.

It took a five-year odyssey through the dark limbosphere, but LUS Fiber finally became a reality in 2009. Now if they can only curry favor with the gods of Tivo.

Lafayette’s non-governmental organizations — they of the Christian charity and Cajun music festivals — ran headlong this summer into opposition from some fiscally conservative assteroids on the City-Parish Council, who vowed to yank the NGOs 450K fund to pave a road or two. The resulting impact created a massive ejecta of blue cards in the council chamber, and cries of “Philistine!” directed at districts 5, 8 and 9.

He’s a Republican turned Democrat who played the role of cheerleader at the annual House-Senate basketball game, and he took down one of the most entrenched political dynasties in Acadiana. Elbert Guillory, then a state representative, bested Patricia Cravins in the Senate District 24 runoff last spring to capture the seat held first by her husband, Don Cravins, and then by her son, Don Junior, in a mud-slinger worthy of Louisiana’s political reputation.

The patina on UL Lafayette’s prowess as a research institution turned dark in March when the Humane Society of the United States and ABC’s Nightline teamed up to air an undercover exposé purportedly showing abuse of primates at the New Iberia Research Center. Faced with a public-relations deep impact, the university didn’t monkey around, dispatching newly minted President T-Joe Savoie to lead a make-nice media tour.

Animus, enmity and gamma rays are being emitted from this collision between badges and bar stools. Police Chief Jim Craft made every impresario’s Scrooge list in November when he mailed out a letter informing them that their monthly fee to cover security on rowdy weekend nights was going up the chimney and through the roof. Now city leaders are considering barring 18-20 year olds from the bars, prohibiting to-go cups, and even establishing a midnight curfew for minors. Bar owners: “Boo hoo!” Craft: “Bah humbug!”

Once upon a time, we worshiped the black oily unguent of sweet crude, but now we float on a more rarefied air, colorless, scentless and shapeless, the compressible, combustible hydrocarbon combination that comprises natural gas. It’s the ichor that binds together the fates and fortunes, (currently at an 11-month high in the futures market) of all of Acadiana.

It’s hard to tell whether the tides in men’s affairs influence precipitation or visa versa. No hurricanes came to blow us away this year, but rain, rain it did, canceling one third of the fall Downtown Alive! and Bach Lunch series as well as the Rudolf Run, and if that weren’t enough of a damper on TGIF, Nik-L Beer got dimed by a freak snowfall.

LSU Baseball was way out in outer orbit under former captain Smoke Lavall. Now, Paul Mainieri, with the help of bullish young talent like Lafayette’s own Mikie Mahtook, has steered the ship back to its rightful place.

Too big to fail? Too tall to tumble? While the giants of banking walked with their heads in the clouds, seer and MidSouth Bank President Rusty Cloutier cried out a prophetic warning. Cursed with a vision of the future no one would believe, Cloutier banked his fires and took to scribbling holy text. His celebrated 15 minutes of fame have already evaporated; meanwhile Wall Street blindly continues to shower gold on its heroes, blithely ignoring Cloutier’s predictions of doom.

When the Saints Come Marchin’ In

Now we know what it takes to unite all Louisiana into one Who Dat nation. Drew Breesus already walks on water and rules over Mardi Gras. How much better can it get?

He sings, and pearls and rubies fall from his mouth. Only one loved by the gods could come from the shadow lands of Texas, master the holy tongue of Creole French, teach himself how to play the devil’s fiddle, dance like he’s got no bones, seduce any girl with just a glance, and be nominated for two Grammys before he has reached the age of 27. Careful Cedric, careful, those most beloved by the gods often suffer strange fates.

At first, bacon was just for breakfast. Then it smoked its way into the occasional sandwich. Encircling oysters, enriching lima beans, snuggling up to foie gras and finally finding its way into desserts like chocolate bacon lava cake or bacon pralines, precocious pork is on every platter. Why fight something so divine? There’s no stigma in making a pig of yourself when you’re living in pure pork heaven.

Les Miles won’t be invited to speak at any upcoming time management seminars. The good news for the mad hatter: After goin’ down the rabbit hole in the waning minutes of the Ole Miss game, Miles got at least partial redemption by leading LSU to a come-from-behind overtime win over Arkansas the following week.

Artist Herman Mhire took it on the chin, nose, cheek and forehead for a Photoshopped show of photographic portraits of local artists. Was it a black eye for beauty or a prophetic vision of the future of art? The crystal ball is in your hands.

Keith Bardwell, the recently former Tangipahoa Parish justice of the peace, traveled so quickly through outer orbit he channeled a 1930s rationale for refusing to marry interracial couples: their miscegenated children would be discriminated against. “I’m not a racist,” he added. “I have piles and piles of black friends. They come to my home, I marry them, they use my bathroom. I treat them just like everyone else.”

The Brett Farve of Louisiana Politics

Our coy Lt. Gov. Mitch Landrieu was in and out and in and out and is finally making a last ditch drive, his third attempt, to become mayor of New Orleans. Maybe with a little help from his U.S. senator sister, he can pull off the Hail Mary pass this time around.

Our most quotable state rep, Rickey Hardy, is also the most unfathomable. One minute he’s standing up for raising educational standards, the next he’s withholding funding because the school board hurt his feelings. How this fits with his oft-quoted motto, “If I tell you there’s cheese on the moon, bring you some crackers,” we may never know.

Eric Cloutier, the former Marley’s Downtown and Club Karma owner, was accused this year of laundering more than $1 million through his bars and electronically manipulating cash registers to conceal sales transactions. In his plea deal, Cloutier agreed to pay more than $200,000 in tax liability and fines. Karma indeed.

Louisiana investors put more than $1 billion of their hard-earned money into Stanford Group Co.’s so-called CDs. The lucky ones (and those who got tips from their financial advisers) who transferred money out of the CD accounts before the SEC shut down the company in February, accusing it of running an $8 billion Ponzi scheme, got most of their money back when a federal appeals court ruled against clawbacks. The rest, not so lucky. Federal prosecutors allege their deposits went into the black hole of Sir Allen Stanford’s pockets.