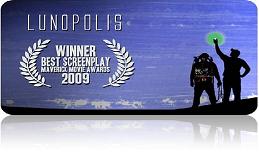 Lunopolis, the independently produced sci-fi adventure movie filmed in and around Lafayette starring local actors, has been awarded the Best Screenplay prize from the Maverick Movie Awards. It was one of dozens of indie films from North America and Europe entered in the annual contest. Formerly known as the New Haven Underground Film Festival, the MMA honors films made without financing from Hollywood studios.

Directed by Lafayette filmmaker Matthew Avant, who also stars in the film along with co-producer Sonny Maynor, the premise of Lunopolis is simple in its way: Humans from the future live on the moon and are in control of earthly events.

The movie was also a finalist in the Best Picture and Best Director categories at this year's MMA; Dave Potter was a finalist for Best Supporting Actor; Lunopolis also got nods in the Best Sound Design and Soundtrack categories. Watch the trailer at the movie's Web site.