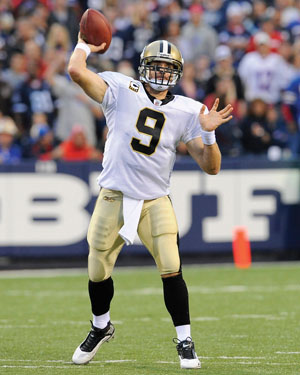 Quarterback Drew Brees was among five New Orleans Saints selected for the NFL’s annual Pro Bowl game — the most Saints chosen for the all-star team since six Saints were selected following the 2000 season. Also making the NFC Pro Bowl roster are right guard Jahri Evans, free safety Darren Sharper, right tackle Jon Stinchcomb and middle linebacker Jonathan Vilma. Brees, who was selected for his fourth Pro Bowl — his third as a Saint — was a first-team selection along with Evans and Sharper; Stinchcomb and Vilma were second-team choices. Pro Bowl selections are made through voting by players, coaches and fans.

Here's to hoping none of the Saints players attends the game, which will played on Jan. 31 in Miami’s Land Shark Stadium — the same venue where the Super Bowl will be played a week later. Teams who qualify for the Super Bowl will not send players to the Pro Bowl.