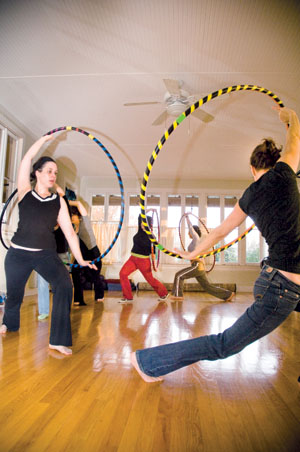 Remember Hula Hoops? The striped plastic rings went on sale in the U.S. in 1958, energized beach parties and made Wham-O a heap of money. Then The Beatles appeared on the scene, and little girls forgot about everything but Paul McCartney. At least that's the way I remember it.Well, Hula Hoops are back, widening a new verb, hooping, and gyring a new focus, Hoopercize. In other words, Hula Hoops aren't just for fun anymore, although Hoopercize teacher Jody Williams would argue with that statement. "It's so much fun, you forget you're exercising," she says.

Williams, 39, is certainly not a child of the Hula Hoop fad of the 1950s. She got her first hoop a year or so ago, after her brother, musician Harold Griffin, noticed some girls hooping at a music festival in New York. "He came over, and we made some hoops out of irrigation tubing," says Williams. This is not the light, child-size hoop on sale in toy stores; Williams is talking about an adult-size hoop with some heft to it that makes spinning the sphere around a circling torso a lot easier.

She started playing with her hoop, looking online for hooping tricks, practicing intermittently. Then she suffered a herniated disk and stopped all exercise for five months. This fall, Christy Leichty, author of Dream of the Marionettes, a musical produced at Cite des Arts, invited Williams to Hula Hoop as part of the carnival that preceded the play.

"That's when I really started practicing," says Williams. "I'd never Hula Hooped in public." She improved her technique to intermediate. "I'm not a Hula master," she says. She noticed she lost weight, 10 to 15 pounds in two months. "I had tons more energy, and I felt great. It helped my back. The worst pain I have now is if I have to bend over and pick up the hoop."

So she sent out a question on Facebook (remember this is not your mother's Hula Hoop) and suddenly found herself facing a hooping class. Nine women hooped it up at an inaugural class at Camellia House, in early December. This week, Williams begins teaching a larger class at The Alamo, the new art/studio space on Simcoe.

Williams built her routine on some dance steps. There are also elements of rhythmic gymnastics. These days, she says, she doesn't want to dance without her hoop. And by the way, if you're looking for mastery, check out Williams' 5-year-old son, Basil, circling four hoops simultaneously on Facebook. As ever, 1959 or 2010, the little kids could always Hula Hoop better.

To sign up for Jody Williams' Hoopercize class, call her at 781-6154, or contact her through Facebook. Williams' instructional skills are good enough to turn staff writer Mary Tutwiler into a seasoned hoopster (see video below).