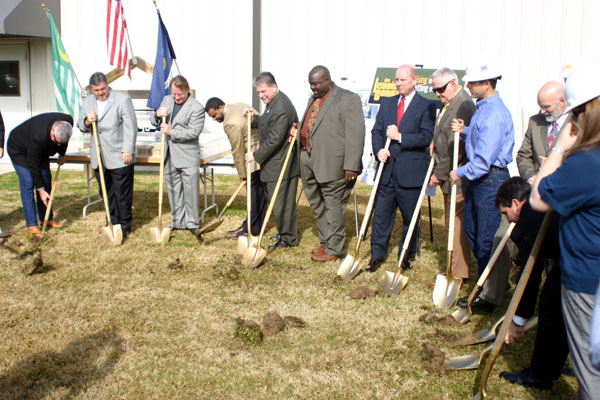 There were plenty of gold-painted shovels to go around as city officials hailed the ground-breaking for a long-awaited two story complex to be built in the heart of downtown. The $8.1 million, 41,000-square-foot Rosa Parks Transportation Center will house the downtown post office on the ground floor; Lafayette Consolidated Government's Traffic and Transportation Department will occupy the second story office space. After the new building's construction, an existing structure at the site, formerly known as Postal Square, will be demolished to make way for parking.

The project has been some 15 years in the making and was originally envisioned under former Mayor Dud Lastrappes' administration. Lastrappes was on hand at the ground breaking along with City-Parish President Joey Durel and councilmen Kenneth Boudreaux, Brandon Shelvin, Sam Dore, Keith Patin, Don Bertrand and Jay Castille.

LCG is funding only four percent of the project, the rest of the funds coming through grants from the Lafayette Public Trust Finance Authority (11 percent), the Federal Transit Administration (67 percent) and federal stimulus dollars (18 percent). LCG Traffic and Transportation Director Tony Trammel noted that the project was on the books when he first returned to Lafayette 11 years ago, and is something his office has worked diligently on ever since. "It's been a long struggle," he said. Look for tomorrow's issue of The Independent for more on the new Rosa Parks Center and other major projects coming soon to downtown Lafayette.