Major projects and the next phase of StreetScape will further reshape downtown Lafayette in 2010. 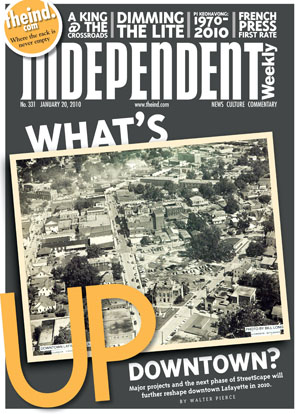 Bad press be damned, downtown Lafayette’s turnaround over the last decade-plus has been nothing short of remarkable. The 1970s were a devastating decade for the district as business moved out, chasing the population south. Faced with decay common to central business districts nationwide, city and state leaders stepped in and in 1983 created the Lafayette Centre Development District — an area comprising downtown and some surrounding neighborhoods. From that grew the Downtown Development Authority, the governing body of the LCDD, and Downtown Lafayette Unlimited, the marketing and promotional arm of the DDA. The two agencies share a staff but have different boards. Their task was simple: return a pulse to the CBD’s EKG.

They went to work. Gordon Square was rehabilitated through a federal grant. Downtown Alive! soon commenced, followed a few years later by Festival International. In 1996, as the city and parish consolidated, StreetScape transformed Jefferson Street into a cypress-lined avenue, and old vacant buildings attracted new tenants. Three public parks rose from the cracked concrete and mashed gravel of parking lots. The StreetScape project — more than superficial improvements, it has also included substantial sub-surface infrastructure upgrades — fell off schedule due in large part to inconsistent budgetary commitment by various city-parish councils. But two new StreetScape projects totalling $1.2 million will happen this year — Jefferson Street from Lee to Johnston and the block of Lafayette Street occupied by the federal courthouse — along with the start of construction on a new multi-modal transportation center, a multi-million dollar renovation of the Lafayette Public Library, completion of the Acadiana Center for the Arts’ theater expansion and, possibly, the demolition and redevelopment of the old federal courthouse. There’s much to be excited about.

“There’s a huge foundation to build on,” says Cathy Webre, executive director of DDA/DLU. “We think it’s going to happen in two ways: There’ll be another layer of existing buildings going through renovation over time, and new construction and in-fill.”

Much work remains to be done, and much of the development in the district will live or die in the near term on the state and national economy, on whether banks are willing to take risks and lend money to developers. Two widely touted projects of the last few years — a hotel adjacent to the federal courthouse on Lafayette Street and a condominium tower next to Parc de Lafayette on Jefferson — have yet to happen. “There are many factors — the economy, the owners and changing conditions and changing agendas and everything else — they haven’t materialized up to that point yet,” admits Webre. “But those concepts are still in play. On the heels of those things is the recession, what’s going to happen with the credit markets. We’re pretty optimistic there’ll come a point where that will happen.”

Here’s a look at four projects that will have an economic and social impact on downtown in the year ahead.

City-Parish officials gathered Tuesday of this week at the 100 block of Cypress Street near the edge of downtown to break ground for the Rosa Parks Transportation Center. Long a dream of LCG officials, the multi-modal transportation center’s construction is overdue. It will eventually replace the drab, brown and mostly vacant building housing the post office and remnants of the transportation department, which will be demolished when the RPTC is complete.

As its name implies, the site will serve as the hub for Lafayette’s transit system, with accommodations for buses, trains and taxis. It will feature more than 40,000 square feet of mixed-use space. The roughly $14.5 million project is being funded by both federal and local dollars.

Opened in 1973, the main branch of the Lafayette Public Library is set to get a $10 million renovation beginning this year. The reboot will include new amenities, meeting- and study rooms and other spaces designed to increase public access and participation, as well as technology upgrades. The renovation will also open up the third floor of the library, which has been used for storage, offering access to thousands of additional square feet. The changes dovetail with the library’s increasingly focused mission on community interaction. “With the economy, people are looking for things to do that don’t cost a lot of money,” says Director Sona Dombourian, “and of course our programs are generally free to the public.”

Did you know the library hosts a family Wii night? We didn’t.

While much of the work will be internal, a very noticeable change will include moving the main entrance of the library to the west side of the building facing Lafayette Street. That part of the renovation will feature some architectural flourishes consistent with the library’s core purpose — making books and information available.

The renovation comes courtesy of Lafayette voters, though many may not remember it. In 2002 parish voters approved a bond proposal for not only the renovation to the main branch, but for the construction of two regional libraries — a north branch in Carencro and a second branch on Johnston Street south of the Mall of Acadiana. Now that the regional branches are complete, it’s on to the main branch. But here’s the rub: When construction finally begins, the main branch downtown will be closed for up to two years — 18 months for the renovation and up to six months to move back in. “That’s the unfortunate part,” Dombourian admits. “We talked about keeping the library open during the renovation, but it would take significantly longer if we did that. It would inconvenience the public, it would inconvenience the staff and the work would go very slowly.” The staff will be farmed out to the regional and community libraries, which will likely get more traffic with the main branch closed, and they’re also talking about leasing warehouse space somewhere downtown to make at least part of the library’s collection available to the public.

But Dombourian says it will be worth it in the long run. “It’s exciting; it’s a little scary, but the end results will be wonderful.” 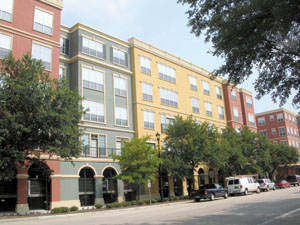 ACADIANA CENTER FOR THE ARTS

The ground breaking for phase two of the Acadiana Center for the Arts took place in April, and the construction — beginning with demolition of the vacant LBA Savings Bank drive-thru — has been remarkably fast. The $10 million dollar theater addition to Lafayette’s showcase arts and cultural center will feature all the amenities of a world-class performance space, including high-definition audio/visual systems, a flexible floor plan to accommodate myriad types of performance art, studio-quality “silent” air conditioning and a design meant to maximize acoustics.

AcA staff hope to dedicate the facility this fall. Once functional, it will host a wide range of activities, from daytime children’s workshops to evening musical and theatrical performances. It will also serve as a permanent home to the Louisiana Crossroads concert series, which has led a vagabond life over the last decade. 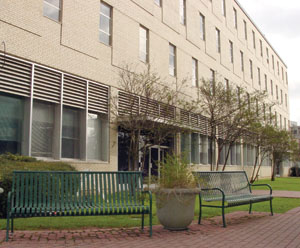 This is the diciest of the four because the Lafayette City-Parish Council hasn’t agreed to let City-Parish President Joey Durel transfer the title of the old federal courthouse at the corner of Jefferson and Main streets to the Lafayette Economic Development Authority. But one thing is certain: the brick building is an eyesore and needs to go. The CPC last month did agree to an environmental assessment of the site ahead of demolition, but the council stopped short of green-lighting a title transfer.

The building was purchased from the feds by consolidated government in 2001 for $800,000 and for the last several years has been largely vacant, home only to offices of the city prosecutor. But LCG was paying about $200,000 per year in utilities and upkeep of the building, which incensed some council members. The city prosecutor’s office has since abandoned the building, but what ultimately takes its place — a parking lot, as some have suggested, or new development — remains to be seen.

Durel wants to turn the building over to LEDA so the 1.8-acre site can become a mixed-use development. According to Webre, just about everyone agrees it is the best use of the space — commercial and/or retail space on the first floor with residential units rising above it.