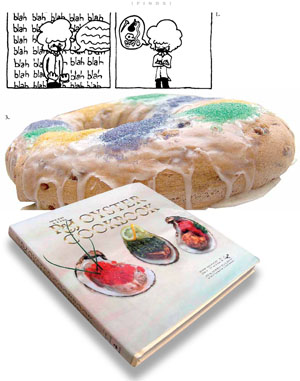 If you dig lo-fi records, audio collage and loose acoustic music that leans more on vibe than technical precision, then you might dig Jake Hebert’s digi-album Television. Written and released under the nom de plume of “Dorian Philbin,” the songs crackle like the tweaky love children of Ricky Nelson and Mike Love while high on nitrous and Funyuns. A naïf waifishness permeates the lovelorn sentiments on this collection of tunes with each track interspersed with a patchwork collection of samples including weathermen, gobbling chickens, commercials and other odds and ends — all of it reminiscent of a Daniel Johnston radio broadcast melding with a less rootsy, pre-Loser Beck. The album is available only in digital form; you can order one by contacting Hebert at myspace.com/dorianphibian. — Dege Legg

The bivalves hit on all cylinders in artist/author Kit Wohl’s beautifully photographed and richly referenced P&J Oyster Cookbook (Pelican Publishing), named after and produced in concert with the venerable P&J Oyster Company, the country’s oldest continuously operating oyster house and supplier to the finest restaurants in New Orleans. Who knew there were so many ways to serve up an oyster? While we here in Cajun Country prefer them raw on the half shell (and smoked on occasion), French Quarter restaurants are home to some of the most innovative ideas in the mollusk sciences. In The P&J Oyster Cookbook Wohl has compiled more than 120 oyster recipes from the Crescent City’s finest restaurants. There are the old familiars like Rockefeller, Bienville and en Brochette, and more esoteric entries like P&J’s Oysters Ceviche — 16 ingredients (plus raw oysters) served in a cocktail glass. The P&J Oyster Cookbook retails for $28 is available through pelicanpub.com and at major book sellers. — Walter Pierce

You want to eat right, but you’re craving carnival, and king cakes just don’t cut it as health food. Or do they? Great Harvest Bread offers a Whole Wheat Cinnamon Burst king cake that is so delicious I may never go back to the white bread variety. Made with fresh ground 100-percent whole wheat flour and Acadiana honey, the king cake combines the solid satisfaction of whole grain bread threaded with the bright flavor of cinnamon (which is touted to support the immune system), and a classic lemony glaze, topped off with traditional purple, green and gold sugar crystals. Sure there are calories, 160 to the slice, but those 30 grams of dietary fibers are great for digestion, and rather than making the body crave sugar, one small piece of this king cake will hold you, happily, all morning long. Call Great Harvest at 236-8966, and check out its Web site, www.greatharvestofacadiana.com, for more king cake options, $17.95 to $22.95. — Mary Tutwiler