With budget setbacks, LITE begins to refocus its mission.

Five employees were being laid off, the result of mid-year budget cuts coming down from the state totaling approximately $300,000 for the center. LITE employees being let go included three artists, an events coordinator and a staffer tasked with business development activities. (LITE is providing severance pay and assisting its former staffers in finding new work.) Other measures were also being taken, including surgical cuts to LITE’s economic development, travel, legal services, office supplies and building maintenance budgets. In addition, the center’s bright flashing lights, which illuminate its signature glass egg and light up the sky each night outside the center, were being extinguished. According to one source, Florsheim told the staff this last measure should serve as a memorial to those the center was having to let go. 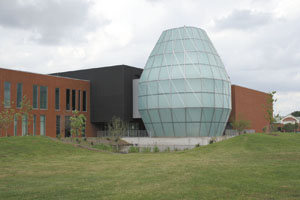 The budget cut totaled just over $300,000, a major hit for a center whose 2009-2010 budget is $3.8 million. Just under 75 percent of LITE’s revenue comes from the state, via UL. The university is currently grappling with a mid-year $4.61 million budget reduction from the state. This comes on top of two other state funding cuts since January 2009, which all together total $16.45 million, approximately 17.5 percent of the university’s state funding. LITE took a slighter, 4.6 percent budget hit last January but then survived the fiscal year end cuts from UL.

“There’s not much wiggle room left in higher education,” says UL President Joe Savoie. “Our approach has been consistent from the first reduction last year. Our primary responsibility is to protect our core mission of providing a high quality academic experience for our students. In order to do that you have to protect those who are most responsible for providing it, which means faculty. Those areas become your priority and then everything else is secondary at that point.” Taking the brunt of this month’s mid-year budget cuts are the multiple economic development and research centers such as LITE, UL’s Small Business Development Center, the Center for Business and Information Technology and the Picard Center, among several others.

The immediate future doesn’t look any brighter. Officials are concerned higher ed may continue to bear the brunt of more year-end cuts to be decided this spring by the Legislature. A more serious concern is what will happen with higher ed funding once federal stimulus dollars run out in 2012. But despite the grim budget outlook from the state, LITE officials remain optimistic about the future.

This year, LITE will officially launch its technology business accelerator program. The Lafayette Economic Development Authority is picking up the majority of funding for the business incubator, designed to assist local startups as well as recruit established businesses to the area. Last year, LITE announced that visual effects company Pixel Magic, which has worked on Hollywood movies including Spiderman 2 and 300, and the upcoming Secretariat, would become the first tenant in the program. Pixel Magic chose to expand in Lafayette over several other potential locations, citing tax credit advantages as well as resources at LITE. The office should be up and running next month.

Three years after its launch, LITE is also preparing to adopt its first business plan. Bradd Clark, chairman of the LITE board of commissioners, has made the issue a priority since last year. The board formed a Strategic Planning Committee — made up of commissioners Bobby Vizier of Knight Oil Tools; Paula Carson, professor in UL’s College of Business Administration; and Mark Zappi, UL’s Engineering College dean — to oversee the process. They hope to have the business plan written and published by summer.

Clark explains it has taken time for LITE to find its identity and its proper place in the market. “You won’t find a center like this anywhere else,” he says. “And that affects you in all kinds of ways. The reality is you’re walking into a new environment where there’s all kinds of surprises.”

“There have been hiccups because of the fact that this is a brand spankin’ new idea,” he continues. “Soon, we’re going to see how this marriage will really start to push things forward for Lafayette.”

There are less than a dozen visualization centers, similar to LITE, in the world. LITE is unique in that it is publicly owned and operated through a partnership between local and state government, UL Lafayette, and LEDA. When it opened, the center was highly touted as a 21st century economic development engine, the potential of which has yet to be fully realized. The feature component of the center is a super-computer-powered 3-D visualization cave. The cave takes almost any form of complex data and turns it into an immersive 3-D environment that can easily be studied and manipulated. The technology has the potential to help facilitate anything from architectural planning to complex medical procedures to oil and gas drilling plans. LITE strives to sell its services in a way that enhances and helps grow local businesses without competing with them.

Since its launch, LITE has struggled to ween itself off state dollars and become more self-sufficient. Originally, seismic analysis for oil and gas companies was seen as one the biggest potential revenue generators for LITE, but the business never materialized. What has emerged is work with the film industry, which now accounts for some of LITE’s biggest clients. The center’s film work involves developing custom computer solutions to render computer-generated images into video. The center has also found success with architectural modeling and digital media work. LITE is still hopeful that it will one day generate business through creating immersive images for the oil and gas industry and the medical industry.

Florsheim, who was named CEO after a national search last year, says LITE is having to find ways to better leverage its resources. “We’re going to have to be much more focused in our business development and take less of a shotgun approach,” he says. While he recognizes a need for more self-generated revenue, he also stresses that LITE’s success can’t be measured solely by profit. “We need a good mix [of public and private revenue],” he says. “We definitely don’t want to be relying as much on state dollars, but LITE was built to create opportunities. If your goal is economic development, you can’t be a total profit center.”