A group of environmentalists, with an eye to the health of the largest wetland in the U.S., crosses the Atchafalaya Basin by canoe. 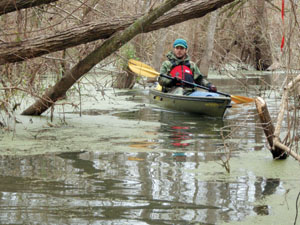 It all began innocently enough when Stacey Scarce, director of natural science for the Acadiana Nature Station, called me and said, “Let’s paddle across the basin!” Her idea was to create a paddle route through the Atchafalaya Basin that would connect two of the leading environmental figures involved with this great wetland. We would begin near the home of photographer Greg Guirard in Catahoula and find our way through the cuts, sloughs, canals and bayous of the Atchafalaya to finish at Bayou Sorrel near the home of Basinkeeper Dean Wilson. Stacey’s hope was to bring attention to the Basinkeeper program as well as giving us a first-hand look at the basin for ourselves. The participants included Stacey, Martin Arceneaux, musician Drew Landry, Becky and me with our dog, Boone, and our friends from Salida, Colo., Jon and Rickie McManus.

Early in the morning of our first day, the water pulsed through the canal, dirty and brown, sweeping us downstream away from the launch at Catahoula. Confusion started early as we swung into a cut to see if it was our first turn-off. We were immediately met by three hunters in an old, well-used aluminum boat. “Where ya’ll goin’ in those things?” the hunters wanted to know. Our reply came (a little sheepishly). “Bayou Sorrel.” “What?! Ya’ll better be careful!” they replied. “The river’s high and there’s some whitewater down there at the Zig Zag. You’re not gettin’ back up here if you go down in those canoes.” With their warnings ringing in our ears, we navigated the Zig Zag (it’s not really whitewater) and into our first long canal of the trip.

Heavy currents are a fact in the Atchafalaya Basin. Since the levees were built in the 1930s, the water flow has been intensified within the confines of these protective earthen structures. Dredging of many of the natural canals has also made the currents stronger. In times of higher water, (for our trip, the Atchafalaya was at 15 feet) the current will run away from the Atchafalaya river. What this meant for us was that we would be paddling mainly upstream until we reached the Atchafalaya River and then downstream to the east levee at Bayou Sorrel. These currents have become a serious issue in the basin.

“What do you feel are some of the changes that have occurred?” Drew asked a hunter we met during our lunch break. “Well, the biggest thing is that so many of the bayous and sloughs we used to hunt are all silted up now,” he replied. “We can’t even get to so many of the areas that we used to hunt anymore. This place has really changed.” His voice trailed off with the resignation of a man who sees a problem but feels powerless to make any changes. We were left to sit and imagine what this place must have been like less than a lifetime ago.

The current intensified as we approached the Atchafalaya River, paddling up Bayou L’embarrass and Long Lake. Finally, we reached the Atchafalaya, heading south with the flow of the water. After a day of paddling upstream, we laid back and enjoyed the river moving us along until we reached our campsite on Splice Island. The island is fixed between the Atchafalaya and the Whiskey Bay Pilot Channel. We paddled past numerous signs such as “Posted Big S Hunting Club” and “No Trespassing — Private Property” before we started finding the “State Lands” signs we were looking for. As the sun dropped over the Atchafalaya, we got our fire going strong to ward off the arctic cold front that had gripped Acadiana over the last several days. Our group settled in to their spots on the log and enjoyed the folksy sound of Drew playing his guitar and singing songs about Greg Guirard, the politics of the common man and Angola state prison.

There was a tension among the group the next morning as we prepared to cross the big water of the Whiskey Bay Pilot Channel. Before we left for the trip, we were warned by state officials, “Make sure you get a sheriff’s boat to meet you at the river before you cross. The currents are extremely dangerous and the wash from a tug can be lethal.” As if that wasn’t enough, one official told us, “I had trouble crossing with my 150-horsepower motorboat last week.” We had assurances that we could make it across from other acquaintances, so the decision was made that we could handle the currents in our small crafts. Being from Colorado, and having never visited the South, everything seemed very foreign to Rickie. She has run many 100-mile ultra-marathons in her life, but from her expression, I could tell this crossing had her worried. Looking out from an eddy alongside Splice Island, everything looked tame enough. No tugs, no whirlpools. “Let’s go!” We started paddling hard upstream, angling the bow of the boat towards the east shore. After what seemed like a really long time, we were all safely in an eddy on the other side. Rickie’s smile told it all. We were across.

After a quick portage around a steel dam, our group found itself in a pipeline canal just off Bloody Bayou. A few miles up the canal, we saw a motorboat approaching. It was Dean Wilson, the Atchafalaya Basinkeeper. He had come out to check on us and see how were faring. We gathered around his boat as Drew asked him questions. “What do you think are the biggest problems facing the Basin right now?” asked Drew. “Right now, I would say that siltation is the biggest problem. Every year we are losing waterways to siltation. And the problem is very solvable,” said Dean. “Where do we go from here?” Dean replied, “We can build sediment traps in areas where water flows from the Atchafalaya into the smaller waterways that feed the sloughs and swamps. By trapping most of this sediment, I feel we will greatly reduce the pace at which the waterways are silting up.”

This pipeline was our home for the night. We spent the evening telling stories, listening to music and eating great food. All too soon, we were loading our canoes for the final day of paddling. A 70-percent chance of rain and impending cold front gave us a little extra urgency to get on the water. While the route on the west side of the basin was simple enough to follow on a map, the east side route was a labyrinth of turns in waterways that many times were too small to see on the map. Dean had helped us with some GPS coordinates that we combined with our map to find our way to Bayou Sorrel. As we made our way towards the east levee, Jon from Salida asked, “Why haven’t these oilfield companies hauled all of this old equipment out of here?” That was a question we didn’t have an answer to. We passed old platforms, small valve trees surrounded by old decrepit inflatable oil spill booms, a half sunken barge near an abandoned well and many other signs of drilling from another era. This left a slightly sour note on the beauty we had witnessed over the last three days as we pushed on through the cold rain towards Bayou Sorrel. Finally, with the landing in sight, there were smiles all around as we paddled the last few yards to our take out.

What we found in our three days in the swamp is that the Atchafalaya Basin is truly a land of paradoxes. Songbirds, woodpeckers, hawks, cormorants, herons and countless other birds graced the trees and shorelines during our trip. Yet these birds are threatened by the cypress logging sins of our generation and previous generations. Private landowners claim areas that boats can float through while commercial fishermen and recreational users claim that these are navigable waterways. The sediments that can help to rebuild our receding coastline are silting the waterways our fathers and grandfathers fished, hunted and paddled. The domestic oil production that our country so desperately needs has created a graveyard of old, unused equipment rusting in the water. But what stands above all of these paradoxes is the immensity of this wilderness. The Atchafalaya is still a wild and beautiful place and the story is still being written on how man will interact with this paradise into the future. We finished the trip feeling a sense of accomplishment and camaraderie as well as an awe for the immensity and beauty this wilderness. We can’t wait to go back!