Mid-century modern is making a comeback at retromodern reuse store. 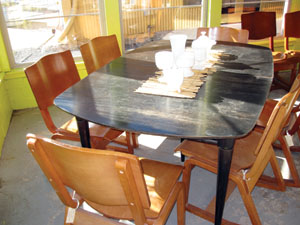 There is bad news and there is good news. The bad news is that Lafayette’s beloved Beyond Flowers ceased to exist on Dec. 31. The good news is that on Jan. 1 it reincarnated as retromodern, a reuse store meant for the eclectic and fashionable souls aching for some unique decor that is still environmentally friendly.

Ty Hanes and his partner, architect Kenneth Delavergne, are the owners and masterminds of this endeavor, which includes a wide array of choices but mainly focuses on mid-century modern pieces. (Think Don and Betty Draper’s home on Mad Men, which is supposed to be somewhat responsible for the trend of mid-century furniture making a comeback.) They have a few brand new items in store now that they scooped up in auction that perfectly mimic the mid-century modern, but their main focus is to sell the original vintage items of the early atomic age. However, they have an upholstery business in store called Grasshopper, run by Marcus Leleux, where they will reupholster the items with new fabric to update the look as well as fix any wear and tear.

They will also be upholstering furniture that customers already own. Have an awesome mid-century chair in that not so awesome mid-century hue of avocado? Bring it to Grasshopper and they can get some new fabric on it for you, perhaps a cherry red or plum purple.

They aren’t stopping there. Two adorable pillows sit on one of the large sofas, made from old fabric swatches. “Basically what I am doing is using some swatches from the ’50s and ’60s that this old designer had piles of,” says Hanes. “I went through them all and took the cool ones and we are going to make more pillows out of them.” 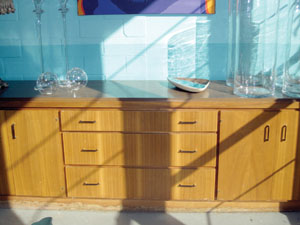 Retromodern also has something you are sure not to find anywhere else: a large set of molds of Greek mythology figures and scenes that are stunning and ridiculously intricate. “These were one-of-a-kind and they were throwing them out!” says Delavergne. They are going to use a mortar and lime mixture to make casts of the molds, and then they will be able to be used any way you can imagine. Perhaps even paired with something modern. Hanes offers a tidbit of advice, “Something really modern next to something really ornate put together in the same place is an eclectic kind of thing, but it works.”

These guys can find reuse for anything. Even their sales counter is reused; it is an old candy counter from a movie theatre in Abbeville. The building itself was an exercise in refurbishing as well. When they acquired it, it was in less than pristine condition to say the least. “We had our appraiser come in and he suggested that we bulldoze it,” says Hanes. “Instead we recycled the space, fixed it up. People are too quick these days to tear things down.” Now the once shabby warehouse boasts grand windows that let the light pour in, beautifully painted walls, and a loft upstairs that would be well suited for a pictorial in Elle Decor.

So what is the most inventive reuse idea Hanes has seen lately? “I saw someone using an old meat slicer in the kitchen to display cookbooks,” he says. “That was really cool.”